ConAgra Foods agreed Wednesday to pay $11.2 million to settle a federal criminal charge that the company shipped Peter Pan peanut butter tainted with salmonella from a plant in Georgia more than eight years ago, triggering a massive recall and food-safety investigation after more than 600 people got sick. 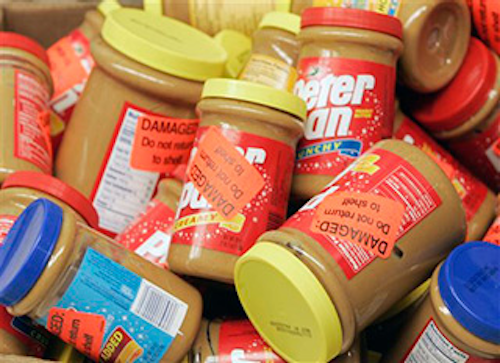 SAVANNAH, Ga. (AP) — ConAgra Foods agreed Wednesday to pay $11.2 million, a sum that includes the highest criminal fine ever in a U.S. food safety case, to settle a federal charge that the company shipped Peter Pan peanut butter tainted with salmonella from a plant in Georgia, sickening more than 600 people and triggering a massive recall eight years ago.

Federal prosecutors filed a single misdemeanor charge of shipping adulterated food against the Omaha, Nebraska, based company along with a plea deal Wednesday in U.S. District Court in Georgia. No company executives were charged.

The company agreed to pay $8 million in criminal fines, which the Justice Department called the highest criminal fine ever in a food investigation, plus an additional $3.2 million in forfeitures to the federal government.

It's the latest in a series of recent prosecutions of manufacturers linked to food poisoning that has companies "taking notice in a big way," said Bill Marler, an attorney who has represented victims of food-borne illnesses for two decades, including more than 100 sickened in the Peter Pan outbreak.

"Manufacturers are talking about the risk of misdemeanors and criminal fines and jail time," Marler said. "The fine and this plea agreement send an incredibly powerful message to food producers across the county that they have to watch their Ps and Qs."

In 2007, a salmonella outbreak blamed for sickening at least 625 people in 47 states was traced to the Sylvester, Georgia, plant where ConAgra made Peter Pan and Great Value peanut butter. As a result, the company recalled all of its peanut butter that had been manufactured since 2004.

U.S. Attorney Michael Moore of Georgia's middle district, which handled the prosecution, said in a statement the plea and fine "should sound the alarm" to U.S. food producers.

"A lot of people got very sick because of the conduct in this case and we are committed to doing all we can to make sure that does not happen again," Moore said.

The fine may do little to ConAgra's bottom line. The company earned more than $303 million in fiscal 2014, and those results were weighed down by restructuring charges. In the latest quarter, ConAgra reported revenue of $3.88 billion.

ConAgra Chief Operations Officer Al Bolles said the company didn't know its peanut butter was contaminated with salmonella before it was shipped.

"We did not, and never will, knowingly ship a product that is not safe for consumers," Bolles said. "We've invested heavily in leading-edge food safety technology and practices over the past eight years, and we are thankful for all of the people who recognize that."

However, the plea agreement notes that ConAgra knew peanut butter made in Georgia had twice tested positive for salmonella in 2004. Prosecutors said the company destroyed the tainted peanut butter and identified likely sources of contamination. The plea document says ConAgra had not finished fixing those problems by the time of the 2007 outbreak.

The plea deal, which still must be approved by a federal judge, extends a recent string of high-profile food safety prosecutions.

Two former Iowa egg industry executives were sentenced to three months in jail earlier this year, and their company agreed to a $6.8 million fine, for their roles in a 2010 salmonella outbreak. Last year, two Colorado cantaloupe farmers received probation and were ordered to pay $150,000 in restitution apiece after being convicted in a deadly 2011 listeria outbreak.

And last fall, the former owner of Peanut Corporation of America, Stewart Parnell, was convicted of felony charges in a 2008 salmonella outbreak also linked to peanuts processed in Georgia. Parnell awaits sentencing and could face prison. Unlike the ConAgra case, prosecutors had evidence Parnell knew he was shipping contaminated peanut butter and tried to cover it up using fake lab tests.

ConAgra officials blamed moisture from a leaky roof and a malfunctioning sprinkler system at its Georgia production plant for helping salmonella bacteria grow on raw peanuts. ConAgra says it spent $275 million on upgrades and adopted new testing procedures before reintroducing Peter Pan peanut butter a few months after the recall.

It's unclear why it took the Justice Department eight years to bring charges and a resolution in the ConAgra case. Nicole Navas, a Justice Department spokeswoman, said it was a complicated case involving a very large company, but declined to elaborate further.

Marler, the food safety attorney, said he suspects ConAgra lawyers proved to be "evenly matched" with Justice Department prosecutors, forcing them to negotiate no matter how long it took.