Lobster Prices Rise as Summer Season Gets Off to Slow Start

Maine lobstermen and retailers say the summer staple is selling in the $6 or $8 per pound range to consumers. That is an average increase of about $1 to $2 over last year. Lobstermen are also getting about a dollar more per pound for lobster at the dock. 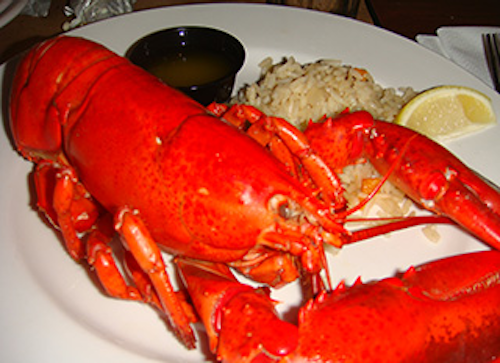 PORTLAND, Maine (AP) — American lobster prices are swelling as the summer fishing season gets off to a slow start in New England.

The summer staple is selling in the $6 or $8 per pound range to consumers, an average increase of about $1 to $2 from last year, Maine lobstermen and dealers said. Prices are high because supply is low — the season picks up after the bulk of lobsters shed shells and reach legal harvesting size, and lobstermen said that hasn't happened yet.

The 2012 and 2013 summers featured early sheds, which resulted in huge catches that flooded the market and depressed prices. State biologists said last year that the cold winter and spring may have held back lobster molting in 2014. That appears to have happened again.

Harkins described those early sheds as "an anomaly," and said prices will likely come down later this summer.

"Everyone I've spoken to expects to see new shell lobsters after (July) 4th," he said.

Maine is by far the biggest lobster fishing state in the country — federal data show that more than 85 percent of America's 2013 lobster catch was from Maine. The state is also in the midst of a multi-year boom in lobster catch, with lobstermen bringing in more than 100 million pounds of lobster every year since 2010.

Lobster value at the dock nosed up last year, with fishermen getting $3.69 per pound after getting less than $3 per pound the previous two years. State regulators said the return to a mid-summer shed made the lobsters more valuable for dealers, processors and restaurants.

This year, lobstermen are getting as much as $6 per pound at the dock because of the low supply, said Sheila Dassatt, executive director of the Downeast Lobstermen's Association. Lobstermen are getting an average of 50 or 75 cents more per pound at the dock than they were a year ago, she said. However, a lot of inshore lobstermen haven't even started fishing yet, Dassatt said.

"A lot of people will call us from out of state and say they want to have a lobster feed," she said. "We're saying, you don't want to do that right now with these prices."