Human resources nonprofit group WorldatWork on Tuesday issued its 42nd annual Salary Budget Survey, which projected that the average budget for raises in the U.S. next year will be 3.1 percent, an increase of 0.1 percent compared to 2015. 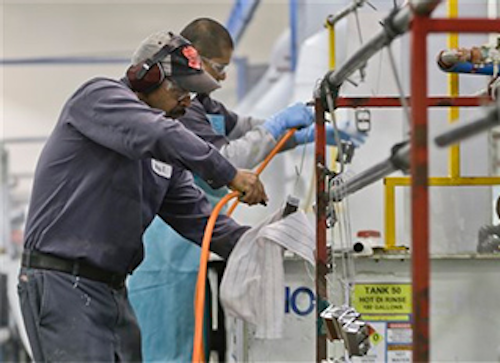 A newly released survey anticipates that companies in the United States will allocate slightly more for pay raises in 2016.

Human resources nonprofit group WorldatWork on Tuesday issued its 42nd annual Salary Budget Survey, which projected that the average budget for raises in the U.S. next year will be 3.1 percent, an increase of 0.1 percent compared to 2015.

WorldatWork said that although those budgets continue to grow from the 2.2 percent level seen during the height of the recession in 2009, the numbers only climbed from 2.9 percent to 3 percent in 2014 and held steady in 2015.

Analysts said reports of an improving U.S. economy did not to translate into additional competition in the labor market.

"The thawing of prevalent pay freezes in 2009 have helped overall averages recover to the 3.0 percent mark, but this may be the 'new normal' until additional pressure on wages comes from somewhere else," said WorldatWork research manager Alison Avalos.

Several industries, meanwhile, could see reduced pay raise budgets next year, led by a mining and oil and gas sector that continues to struggle amid low oil prices.

The survey polled companies from 19 nations, including Australia, Canada, China, India, Russia and the U.K. Most of the 19 countries should see a marginal increase in pay raise budgets next year, with China among those expected to see lower amounts.