Net farm income is expected to decline 36 percent to $58.3 billion, the USDA said in a report released Tuesday. That's down from last year's $91.1 billion and the lowest in nine years. 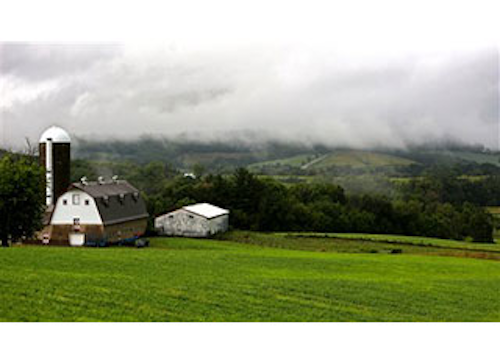 DES MOINES, Iowa (AP) — It will be a less profitable year for farmers as low grain, milk and hog prices cut into income, U.S. Department of Agriculture officials say.

Despite the forecast of the third-largest corn crop and second-largest soybean crop on record, the abundance of grain left over from last year's crop and the anticipated harvest this year has kept prices below the cost of production while the cost of seed, fertilizer and land has dropped only slightly.

Net farm income is expected to decline 36 percent to $58.3 billion, the USDA said in a report released Tuesday. That's down from last year's $91.1 billion and the lowest in nine years.

Just two years ago, net farm income was the highest ever, $123.7 billion. Last year, sliding grain prices were offset in part by record livestock prices. This year, both are down; crop receipts are expected to fall 6.2 percent and livestock receipts will be down 9.1 percent. Expenses, however, won't drop very far — less than 1 percent.

The pinch will translate into many farmers having to dip into savings or increase borrowing.

"A lot of the cash reserves that we've built up over the past few years, that's what we're burning through right now to offset this lost income," said Chad Hart, an agricultural economist at Iowa State University.

Farm debt is forecast to increase by 5.8 percent, the report said, but that "financial risk ratios remain in acceptable ranges for now."

Those who rent land have operated without profit for six years as rental prices soared with higher land values, according to Jerry Main, who plants corn and soybeans on about 500 acres of his own land and some rented in southeast Iowa. Farmers who own land fare better but low prices are having a financial impact, he said.

"My banker told me last spring that the year 2014 showed a lot of red ink for farmers and for 2015 at today's corn and soybean prices it's even worse," Main said.

Agriculture-dependent businesses are showing signs of stress, too.

Deere & Co., the world's biggest farm equipment manufacturer, laid off more than 1,000 workers in Iowa and Illinois factories this year. And Tyson Foods will end beef production at an Iowa plant, a move that affected 400 people.

Government payments including crop insurance, price support programs and disaster relief to farmers are projected to rise 16 percent to $11. 4 billion this year.