The new owners of Mister Bee Potato Chips want to bring the company back to the forefront of people's minds. 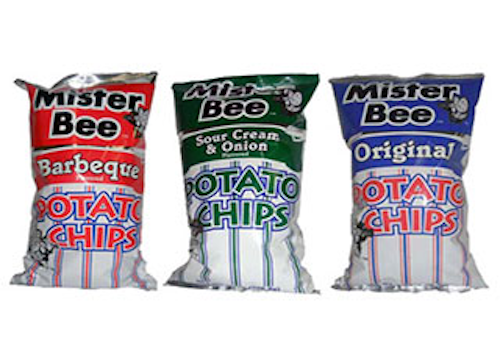 PARKERSBURG, W.Va. (AP) — The new owners of Mister Bee Potato Chips want to bring the company back to the forefront of people's minds throughout the community.

The group is operating under the company's old name, the West Virginia Potato Chip Co., and is continuing local operations.

"They are 100 percent committed to keeping the business in Parkersburg and growing it," said Doug Klein, vice president of sales and marketing for Mister Bee. "They are putting money back into the business to see it prosper and succeed. They have already invested in the company as far as equipment additions to the process."

Mister Bee has been producing over 2 million pounds of potato chips a year with over $2.5 million in sales annually, Klein said. The plant has 18 full- and part-time employees.

The new owners are looking to increase sales so production can increase, Klein said. The Parkersburg plant is manufacturing an average of three days a week.

"They want to expand to where we would be running two shifts, five days a week," Klein said. "They know what the potential is and what it has done in years past.

"They are going to do everything in their power to grow the business again so it is a strong regional brand in West Virginia and southeastern Ohio."

Reed, who is the new company president, said he had previously done business with Gregory Barton, brother of original owner James Richard Barton. Reed has been involved in the oil and gas industry.

Discussions started about the business which led to the opportunity for the new owners to purchase the company. They are not releasing the details of the sale.

"None of us are from the snack food business so it has been a breath of fresh air to think outside the box and try some new things that people are not used to seeing out of Mister Bee," Reed said.

The new owners saw something in the company that could be nurtured and grown.

"We saw this as an opportunity," Reed said. "This company is a staple that has such a good following in the community and has a lot of support."

Reed has been down at the plant for the last couple of months, getting to know the business and the people there.

That includes a new salter which is already in and running as well as a new filter system which is being put in.

"These upgrades are what needed to be done," Reed said.

They are looking at doing other improvements around the site to modernize operations.

"Right now, we want to get the chips out to a lot of areas that don't have them," Reed said. "We have room to expand from a capacity standpoint. We have so much capacity we could add."

They have already addressed some of the service problems in the Parkersburg area.

"Right now, we are about where we need to be to take care of the local customer," Reed said. "We want to get the chips into some areas of the state that had not seen them before.

"There are some opportunities, just from a distribution standpoint, to get our products out in front of other people. On the flip side, we are looking forward to introducing some new products like people used to see from Mister Bee," Reed said.

The brand reaches from the Mid-Ohio Valley to around Beckley, to Huntington to Clarksburg and north as far as New Martinsville and Morgantown.

"If we can service the entire state of West Virginia, that would be a tremendous increase from what we do now," Reed said. "However, we want to take care of this area before we do any of that."

The new owners want the company to be engaged in the community like it had been years ago.

Reed said they are already doing sponsorships and working with local schools on some things. One day, the new owners would like to start up the plant tours again for area school children and others which is something many people around the area have fond memories of doing when they were young.

"The company is a part of the community," Reed said. "I ate Mister Bee's as a kid (growing up in Doddridge County).

"We are local and that is what we want the company to feel like. We want it to have that hometown feel that is always had."

The new owners, who are from around Wood, Jackson and Doddridge counties, want the company to be able to introduce new product lines as well as improve the quality and consistency of the products being put out. They will be looking at possible partnerships in production and distribution with others.

"We are looking to think outside the box," Reed said.

The company's position in the community and in people's minds is what attracted the new owners to want to buy it.

"We felt like it was a great deal — value-wise for us — and we could make a difference and get it to the place where it needed to be," Reed said. "We felt there was a lot of low hanging fruit where we could make an immediate improvement.

"When you think of West Virginia and you think of food, what is more recognizable than Mister Bee? You can't beat it to be able to take a brand like that and then expand on top of that," Reed said.