In an interview in the March issue of Cooking Light magazine, Mrs. Obama says Sam Kass, the family's former personal chef, had taken a stand against the boxed variety, which includes processed cheese powder among the ingredients. 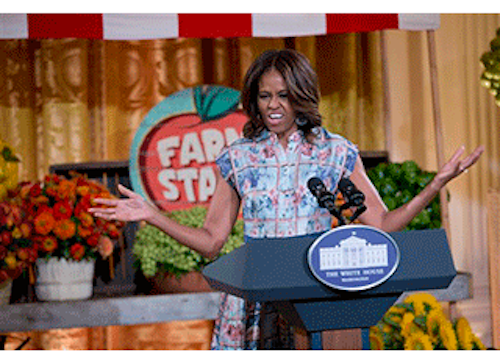 WASHINGTON (AP) — Michelle Obama says she dropped boxed macaroni and cheese from her family's diet after her daughter couldn't turn a block of cheese into cheese powder.

In an interview in the March issue of Cooking Light magazine, Mrs. Obama says Sam Kass, the family's former personal chef, had taken a stand against the boxed variety, which includes processed cheese powder among the ingredients.

"He said there's nothing wrong with mac and cheese, but it's got to be real food," she said, crediting him with helping to eliminate processed food from their diet.

Kass gave her daughter Malia, who was about 8 years old at the time, a block of cheese and challenged her to turn the fresh cheese into powder.

"She sat there for 30 minutes trying to pulverize a block of cheese into dust," Mrs. Obama says. "She was really focused on it and it just didn't work, so she had to give up. And from then on, we stopped eating macaroni and cheese out of a box because cheese dust is not food, as was the moral of the story."

As she marks the fifth anniversary of her anti-childhood-obesity initiative, the first lady says it feels like there's "a new norm" in how families think about food and what's healthy.

Because food is personal and people are obsessed with it, Mrs. Obama said she's trying to deliver "a message of change" that doesn't assign blame but provides information needed to make better choices. "And starting with kids has been an important first step because, as I've always said, parents will do for their kids what they won't do for themselves."

She plans to spend time this year encouraging people to prepare and eat more of their meals at home.

"What we do know is that the food you cook is healthier, and it can be more affordable, but it takes some skills," such as learning how to cut a chicken into its parts, Mrs. Obama said.

The first lady said her initiative and her husband's health care law will, in the long run, save the country money by improving people's health.

"You don't have to be an Olympic athlete to be healthy, but you do need to walk your dog or take your kids to the park periodically and throw a football around," she said.

"I want to be able to walk up a temple or a ruin on my own and see the world. And I can only do that if I've been investing in my health now," the first lady said. "And just imagine, if we've got kids 20, 30, 40 years younger than we are doing that now, they're going to be some of the strongest 80- and 90-year-olds we've ever seen. And that's our dream."

The magazine features Mrs. Obama on the cover, the first time in the publication's 28-year history thatfood was not the cover subject. The issue is due on newsstands Friday.