Mercury on Rise in Hawaiian Yellowfish

Mercury is a potent toxin that can accumulate to high concentrations in fish, posing a health risk to people who eat large, predatory marine fish such as swordfish and tuna. Mercury concentrations in Hawaiian yellowfin tuna are increasing at a rate of 3.8 percent or more per year, according to research that suggests rising atmospheric levels of the toxin are to blame. 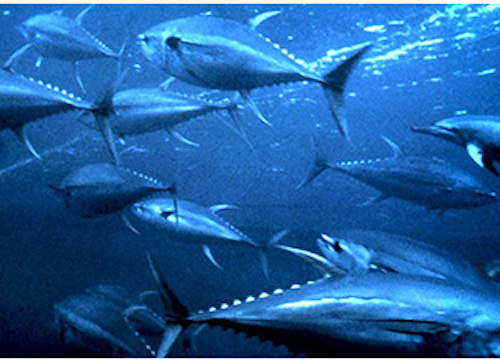 Mercury concentrations in Hawaiian yellowfin tuna are increasing at a rate of 3.8 percent or more per year, according to a new Univ. of Michigan-led study that suggests rising atmospheric levels of the toxin are to blame.

Mercury is a potent toxin that can accumulate to high concentrations in fish, posing a health risk to people who eat large, predatory marine fish such as swordfish and tuna. In the open ocean, the principal source of mercury is atmospheric deposition from human activities, especially emissions from coal-fired power plants and artisanal gold mining.

For decades, scientists have expected to see mercury levels in open-ocean fish increase in response to rising atmospheric concentrations, but evidence for that hypothesis has been hard to find. In fact, some studies have suggested that there has been no change in mercury concentration in ocean fish.

By compiling and re-analyzing three previously published reports on yellowfin tuna caught near Hawaii, U-M's Paul Drevnick and two colleagues found that the concentration of mercury in that species increased at least 3.8 percent per year from 1998 to 2008.

A paper about the study is scheduled for online publication today in the journal Environmental Toxicology and Chemistry. The other authors are Carl Lamborg of the Woods Hole Oceanographic Institution, now at UC Santa Cruz, and Martin Horgan.

"The take-home message is that mercury in tuna appears to be increasing in lockstep with data and model predictions for mercury concentrations in water in the North Pacific," said Drevnick, an assistant research scientist at the U-M School of Natural Resources and Environment and at the U-M Biological Station. "This study confirms that mercury levels in open ocean fish are responsive to mercury emissions."

Drevnick and his colleagues reanalyzed data from three studies that sampled the same yellowfin tuna population near Hawaii in 1971, 1998 and 2008. In each of the three studies, muscle tissues were tested for total mercury, nearly all of which was the toxic organic form, methylmercury.

"Mercury levels are increasing globally in ocean water, and our study is the first to show a consequent increase in mercury in an open-water fish," Drevick said. "More stringent policies are needed to reduce releases of mercury into the atmosphere. If current deposition rates are maintained, North Pacific waters will double in mercury by 2050."