Meat companies have tried to rehabilitate an image tarnished in recent years by health and environmental concerns. Now the industry is aggressively working to discredit a proposal for new dietary guidelines that recommends people eat less red and processed meat. 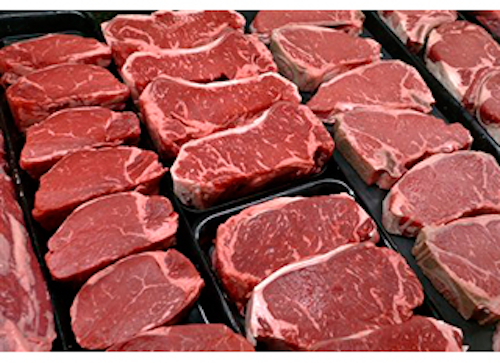 Meat companies have tried to rehabilitate an image tarnished in recent years by health and environmental concerns. Now the industry is swiftly and aggressively working to discredit a proposal for new dietary guidelines that recommends people eat less red and processed meat.

The proposal last month by a government advisory committee also relegates the health benefits of lean meat to a footnote to the main recommendations.

"We've been put in a position over the years to almost be apologizing for our product, we're not going to do that anymore," said Barry Carpenter, the president and CEO of the North American Meat Institute.

The meat industry long has been one of the more powerful lobbies in Washington, enjoying an especially close relationship with the Agriculture Department, which has inspectors in meat processing plants.

Together, the meat processing and livestock industries spent about $7 million on lobbying last year and donated more than $5 million to members of Congress in the last election cycle, according to the political money and influence tracking website OpenSecrets.org.

Meat industry executives say their push is about the American perception of red meat, rather than just dollars, though the guidelines can have an eventual impact on government purchases for the military and school lunches.

Carpenter's group recently released a video of the slaughter process to counter criticism about the way animals are killed. It also is trying to better engage with consumers through social media, tweeting links to its "Meat Mythcrushers" site, which looks at nutrition and other issues from the industry's point of view.

Now, they are pushing the departments of Agriculture and Health and Human Services, which will write final dietary guidelines by year's end. They are meeting with officials and asking them to do what they have done in the past: prominently recommend lean meats as part of a healthy diet. They also are asking their many, mostly Republican, allies in Congress to pressure the Obama administration.

"The secretaries share responsibility for these flawed recommendations," said House Agriculture Chairman Michael Conaway, R-Texas. Conaway was among the House members who wrote the departments last week about the overall recommendations, including advice that people eat a more sustainable, plant-based diet because it is better for the environment.

Agriculture Secretary Tom Vilsack has not said what the final guidelines will look like. But he has pledged to keep them focused on nutrition and diet, giving the meat industry some hope that perhaps at least the environmental portion could be left out.

A spending bill passed by Congress in December asked him "to only include nutrition and dietary information, not extraneous factors" in the guidelines.

Environmental groups are lobbying on the issue, pushing the departments to keep that language. Public health groups praised the language on red meat, noting that red meat has been linked to heart disease and colorectal cancer.

Meat executives counter their product is rich in nutrients and helps people get enough protein in their diets. Processed meat is often lean, they say.

Carpenter said he believes the report is encouraging people to eat less lean meat. "The fact that they put it in as a footnote really convinces me that that's true," he said.

Not true, say members of the advisory committee.

"These patterns can be achieved without eliminating any food group," said Barbara Millen, head of the advisory committee, referring to the diets the committee described.

Millen explains that the panel looked at the common characteristics of healthy diets that contributed to good health, and high-protein foods such as seafood and legumes emerged most consistently. But the committee added a footnote to clarify that "lean meats can be a part of a healthy dietary pattern."

"I am really sorry that someone took offense to a footnote," said Miriam Nelson, another committee member. She said the guidelines are a technical, scientific report and are written to show a range of diets.

"This is not an attack on lean meat. It's on the amount and how we're eating meats overall," Nelson said.

Other meat groups also are criticizing the guidelines.

Meat groups pushed back, and the Senate panel heard them out. A revised version included new language on meat: "Decrease consumption of animal fat, and choose meats, poultry and fish that will reduce saturated fat intake."