The FBI is investigating an apparent attempt to firebomb a fast-food restaurant in Reno where authorities reported a window was broken, a flammable liquid found inside and the initials of an animal rights group scrawled on a drive-thru sign. 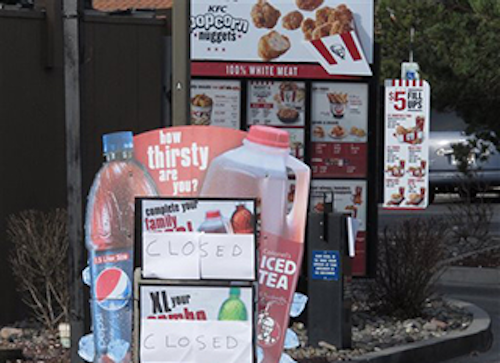 RENO, Nev. (AP) — The FBI is investigating an apparent attempt to firebomb a fast-food restaurant in Reno because of the possibility it could have been an act of domestic terrorism after the initials of an animal rights group were found scrawled on a drive-thru sign, local fire officials told The Associated Press on Tuesday.

The FBI has confirmed the investigation at a KFC in Reno where a window was broken and a suspected flammable liquid was found inside when employees reported for work Monday morning.

The initials spray-painted on the sign, ALF, are those used by the Animal Liberation Front — a group that long has accused KFC of animal cruelty. The group most recently claimed responsibility for a fire in February 2014 that badly damaged a KFC in Upper Hutt, New Zealand.

FBI spokeswoman Bridget Pappas in Las Vegas confirmed her agency is investigating, but she refused to say why.

"We don't have any additional details at this time," Pappas told AP. "And because it is an ongoing investigation, we won't be commenting."

"Because of the 'ALF' that was written on the outside there, we secured the scene and waited for the FBI, and the FBI took over that investigation because of the potential for domestic terrorism," Palmer told the AP on Tuesday. It appeared that a glass bottle had been thrown through the window containing what appears to be a flammable liquid, he said.

"It looks like it is, but until it is tested, we can't be certain," he said, adding that the FBI is supervising the testing and that he had no further comment.

The U.S. Bureau of Alcohol, Tobacco, Firearms and Explosives was not involved in the investigation as of late Tuesday, the spokeswoman for the bureau's San Francisco field division said.

"ATF has offered the FBI our support in any kind of laboratory analysis," special agent Helen Dunkel said. "They are the lead, and we really don't have a part in this as of yet."

No one was hurt, and the Reno restaurant suffered only minor damage. The writing on the sign had been removed by Tuesday, but the drive-thru remained closed.

Nicoal Sheen, a national press officer for the North American Animal Liberation Press Office in Los Angeles, said Tuesday that the group is not aware of anyone claiming responsibility for the incident in Reno. "We have not received any anonymous communique on this," she told the AP.

Another animal rights group, People for the Ethical Treatment of Animals, picketed in front of a Reno KFC in 2003 in protest of the restaurant chain's refusal to change the way it treats and kills chickens.

The most recent violence in Reno that the Animal Liberation Front claimed responsibility for was a fire in May 2009 that gutted the business office of a company that ships monkeys from China for scientific research in the United States and elsewhere.

In 2007, several members of a cell group of the Animal Liberation Front were convicted of setting more than 20 fires in five Western states that did a total of $40 million in damage, including an arson fire in 2001 at a U.S. Bureau of Land Management facility housing wild horses in Litchfield, California — about 90 miles northwest of Reno.

Reno police spokesman Officer Tim Broadway said Tuesday there have been no new developments in the May 2009 case. Broadway said he couldn't comment on the latest incident involving KFC because the FBI is handling the investigation.