Ramen: Not Just For Eating Anymore

In Japan, ramen isn't just for eating: There are entire museums devoted to it. Yokohama, a short train ride from Tokyo, has one museum for instant ramen and another for handmade ramen, and both offer samples to taste or take home. 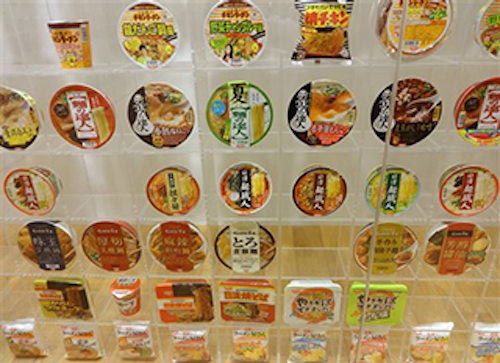 TOKYO (AP) — There are two kinds of ramen in this world. There's the packaged staple of dorm-room cuisine, one of the most processed, industrialized foods ever invented. And then there's the trendy, artisanal, handmade soup that fans line up for hours to try.

But in Japan, ramen isn't just for eating: There are entire museums devoted to it. Yokohama, a short train ride from Tokyo, has one museum for instant ramen and another for handmade ramen, and both offer samples to taste or take home.

At the Shin-Yokohama Raumen Museum (the extra u gives the word a retro feel), you'll find nine shops showcasing different styles of ramen. The English brochure helpfully describes the soup at each, noting whether the noodles are straight, curly or wrinkled, and how thick they are using a five-point scale. The richness of the broth is also rated on a five-point scale.

At each shop, you order and pay for your ramen in an old-fashioned way, via a ticket vending machine in front with photos on the buttons. Some varieties are offered in small portions so you can try more than one type, although for some visitors, one small portion will be enough. If you can't tell, ask the staff which button is mini-ramen (the term is the same in both languages).

A bit overwhelmed, my friend and I chose the nearest shop that didn't have a line, selling ramen from a replica of a shop in Kyushu (in the south of Japan) founded in 1954. The broth was delicious as were the crumbles of roasted garlic sprinkled on top. Straight noodles the exact thickness of spaghetti made a less exotic impression than I'd hoped for, so pay attention to that helpful brochure.

Other choices include what's claimed to be the most famous miso ramen in the country, from Hokkaido, and a replication of soup from a shop in Tohoku that was swept away in the 2011 earthquake and tsunami. I was just a few days too early to try a newly opening shop from the global chain Ippudo, which has 40 branches outside Japan and was advertising noodles made from baguette crumbs, plus broth combining French consomme and Japanese dashi stock.

The ramen shops are located in a two-story re-creation of a romantically shabby 1958 city shopping district, eternally bathed in twilight. (The year was chosen for the birthdate of instant ramen.) There are also movie posters and shop facades for a post office and pawn shop, along with a real store selling old-fashioned candy and toys. It's a period that evokes nostalgia for the Japanese. Some things may also be familiar to Americans of a certain age, like a vintage Coke machine.

In the gift shop, you can assemble a customized package of ramen to take home, choosing from different kinds of vacuum-packed fresh noodles, soup flavor and flavored oil, with a personalized label. The shop also sells prepackaged ramen, bowls, spoons and other souvenirs. Nearby are exhibits about ramen in Europe, regional ramen around Japan and historic ramen-making implements.

Then, if you're weary of foodie seriousness about what is, after all, simple noodle soup, the antidote is just a short train or subway ride away: Yokohama also has a branch of the Cup Noodle Museum.

Where Shin-Yokohama Raumen Museum is a food theme park for adults, Cup Noodle Museum is designed for kids. The small print on its brochure notes that it's formally named the Momofuku Ando Instant Ramen Museum after the inventor of instant ramen. Run by an educational foundation that Ando started, the fun here is designed to support some high-minded goals with exhibits about creativity and invention.

Non-Japanese speakers get to skip the lessons except for what's printed in the English brochure. Exhibits include a reproduction of the modest shack where Ando invented Chicken Ramen, a display of the astonishing number of varieties of instant ramen that the Nissan Food Products company has produced since then, and a food court called Noodles Bazaar, said to reproduce an "Asian night market" and "eight varieties of noodles that Ando encountered during his travels in search of ramen's origins." The food stands include Italian pasta, Vietnamese pho, and dishes from Kazakhstan, China, Korea, Thailand, Malaysia and Indonesia. And there's a play area (an extra 300 yen) where kids can experience the Cup Noodle manufacturing process from the point of view of the noodle.

The main attraction here, though, is the make-your-own section. For a separate fee for a timed ticket, kids (or adults) can make their own personal Cup Noodle, decorating the cup, then putting in the noodles and choosing the soup and toppings. Watch the lid get sealed and the whole cup shrink-wrapped, then your creation is enclosed in a cool protective package that you pump air into to cushion it on the trip home. There's also the much more involved Chicken Ramen Factory, a 90-minute session where participants make the noodles from scratch.

A warning: Cup Noodle Museum, educational as it is, is extremely popular with school groups and was packed with them on the weekday I visited.