Food manufacturers and restaurants are taking the dairy industry by the horns on an animal welfare issue that's long bothered activists but is little known to consumers: the painful removal of budding horn tissue from calves so farm workers or other animals don't get gored later. 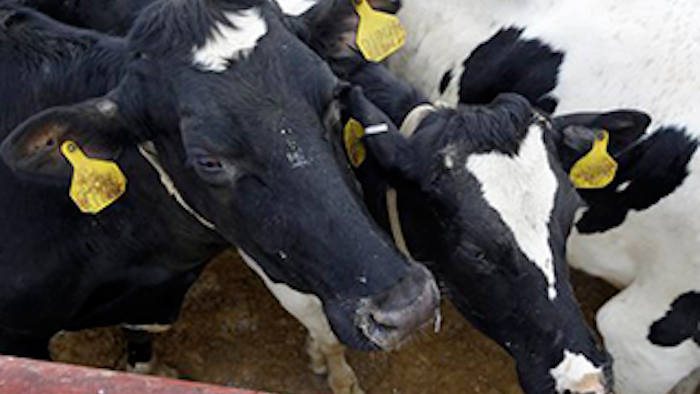 DES MOINES, Iowa (AP) — Food manufacturers and restaurants are taking the dairy industry by the horns on an animal welfare issue that's long bothered activists but is little known to consumers: the painful removal of budding horn tissue from calves so farm workers or other animals don't get gored later.

It's routine to remove the horn tissue from young calves before it attaches to the skull, either by burning it out with heat or chemicals or digging it out with sharp instruments. While veterinary groups recommend pain treatment, only about 10 percent of calves are properly medicated, according to Vermont dairy cattle breeder Mark Rodgers.

Certain cows carry a dominant no-horn genetic trait, and are called polled cows. Research has shown it's cheaper to breed polled cattle than to dehorn cows, but experts say the dairy industry has been slow to expand polled genetics because it's been focused on boosting milk productivity. Yet, the change may come sooner than producers expected, as some of the nation's largest food companies, such as General Mills, Nestle and Dunkin' Brands, are asking dairy suppliers to incorporate polled cattle into their herds.

The beef industry already has largely adopted polled cattle. Less than 1 percent of the nation's dairy herds carry the hornless polled gene, but 10 times more polled animals have been registered with breeding programs in the past three years, Rodgers said.

"It's an animal well-being issue but it's also a management issue. It's a labor-saving issue. Ask anyone working on a dairy farm and they'll tell you the most disagreeable job on those farms is dehorning calves," said Rodgers, who belongs to an international group of 46 polled breeders, including farmers in Australia, Canada, England and Germany.

But Chris Galen, a spokesman for the National Milk Producers Federation, a trade group, said the industry believes removing horn buds at a very young age is safe and "minimally disruptive, uncomfortable process."

U.S. Department of Agriculture and Purdue University research has shown it's more expensive for farms to dehorn cows than it is to use polled genetics, something Galen says there is "merit in exploring," but added, "it's a very limited gene pool in dairy breeds right now and that won't change for many years."

The People for the Ethical Treatment of Animals, or PETA, began working with restaurants, food makers and dairy farms three years ago to push the use of polled genetics. David Byer, PETA's senior corporate liaison, said the public doesn't know what milk cows go through.

"These major brands are coming out publicly because they now see it as a viable option for the future for eliminating the very cruel practice of dehorning," he said.

General Mills, which makes Haagen-Dazs ice cream and Yoplait yogurt, is the latest with a new animal welfare policy that "supports the use of polled genetics breeding programs to promote polled or naturally hornless cattle, thereby eliminating the need for dehorning."

Nestle, which buys nearly 2 billion gallons of milk a year, has a similar policy, though spokeswoman Edie Burge acknowledges "dairy genetics have not progressed as fast as beef genetics."

Both companies' policies advocate the use of analgesics or anesthetics to reduce pain in disbudded calves.

The animal welfare policy of Dunkin' Brands, which owns Baskin-Robbins ice cream, asks its suppliers to "support industry-wide efforts to promote the humane treatment of cattle, including the responsible use of polled breeding." And dining chain Denny's released a policy in February indicating a "purchase preference" for milk from polled dairy cattle.

Grocery-chain suppliers increasingly are on board, too, such as Colorado-based Aurora Organic Dairy, which supplies Wal-Mart and Costco, and Trader Joe's supplier Rockview Farms.

Fair Oaks Farms in Indiana, a Kroger supplier and one of the nation's largest dairy farms with 36,000 cows, is phasing out horned milk cows. About a quarter of its newborn calves are hornless due to selective use of bulls with the polled gene, CEO Gary Corbett said. It began to do so after genetics in polled bulls improved and there was proof that good traits like milk production weren't being lost.