The local oyster industry is under threat from water-flow issues, environmental concerns, health and safety regulations and economic realities. Restaurants from New Orleans to Tampa and beyond tout Apalachicola oysters as the tastiest oysters around, but the annual harvest has been in decline. 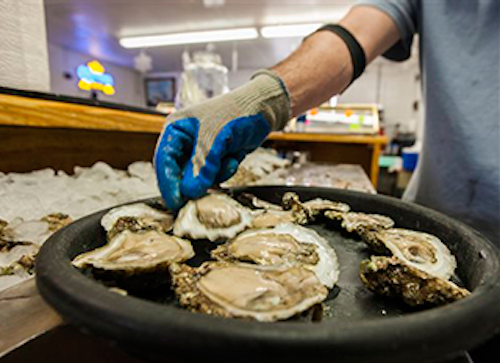 The local oyster industry is under threat from water-flow issues, environmental concerns, health and safety regulations and economic realities. Restaurants from New Orleans to Tampa and beyond tout Apalachicola oysters as the tastiest oysters around, but the annual harvest has been in decline.

Apalachicola-based oyster houses have either stopped selling to restaurants on the wholesale market or have opted to supplement their supply with oysters from Texas and Louisiana.

"From generation to generation, we have worked here in this paradise and we are proud of our oysters, we take pride that it means something when the oysters come from here," Vinson said, describing the local catch as "the best oysters in the world. They are sweet with the perfect blend of salinity in the water."

When oyster harvesting was at its peak, harvesters could earn more than a thousand dollars a week, he said. Now it is about half that.

"It is definitely not like it used to be. This use to be a very high-paying job," he said. "I honestly don't see the next generation making it out here."

That decline shows in Apalachicola, which sits on the river of the same name, 75 miles southwest of Tallahassee. It is on the Florida Panhandle near the Big Bend — the juncture of where the west coast of the Florida peninsula makes its turn to the west.

A fishing village of about 2,500 people, it gives visitors a rare glimpse of Florida coastline not dotted with high-rise condominiums, amusement parks and T-shirt shops. Instead, the waterfront is lined with small oyster processing houses, boat ramps and side roads lined with the small, often-dilapidated boats used by the oystermen who work the shallow bay. The town boasts historic Southern homes with wide front porches and Spanish moss and magnolia trees growing in the yards.

Nowadays, many of the oyster houses are abandoned and fewer oyster boats comprise the flotilla that meanders across the bay early each morning.

The oystermen use heavy, shovel-length tongs to reach the bottom of the bay and haul up bundles of oysters that then must be hammered apart. It is back-breaking work, often in scorching sun and humidity.

"It takes its toll on your knees and your back and there is a lot of skin cancer around here," said Jimmy Lashley, a longtime oysterman and head of the Franklin County Seafood Workers Taskforce. "You wouldn't want to pick a fight with an oysterman though; you have to be tough to do this work."

Lynn Martina's parents founded Lynn's Quality Oysters, a local house, more than 30 years ago. Her business used to take in up to 150 sacks of about 240 oysters a day.

"Now we are lucky if we get five," she said.

Martina once supplied South Florida restaurants, but now limits her business to walk-in retail customers. And the price of the limited supply has spiked from about $20 for a bag to about $70 now.

The reasons for the decline are many. That perfect blend of water Vinson described is endangered by the population explosion in Atlanta, 340 miles to the north. In a decades-long dispute, Florida has claimed Georgia is hurting the oyster harvest by taking too much water from Lake Lanier, the federal reservoir that supplies water to the Atlanta area and feeds the Apalachicola River.

The water that makes the river is now often acidic and high in nitrogen, which can promote algae growth, said Lisa Sautonia, a scientist with the Natural Resources Defense Council. Acid and algae are bad for oysters.

Publicity surrounding sporadic outbreaks of the potentially fatal bacteria Vibrio Vulnificus, which can be transmitted by eating raw oysters, and lingering concerns about the 2010 BP oil spill in the Gulf of Mexico have also hurt.

Because of the bay's decreasing number of oysters, the Florida Fish and Wildlife Conservation Commission has closed some areas to harvesting, restricted the season in other parts, lowered the commercial and recreational daily harvest limits and has begun strict enforcement of a three-inch minimum size for harvested oysters.

In August, the state announced a plan to use a $6 million federal grant to help the beleaguered industry through monitoring, improvements to processing facilities and vocational and educational training to help oyster workers find new jobs. It is paying some oystermen to construct artificial reefs they say will be oyster habitat and help restore their numbers.

Like Vinson, Toby Dalton comes from generations of Apalachicola oyster workers. As Dalton and his partner set out to harvest oysters on a recent morning, he said he fears hand tonging oysters will eventually become a tourist attraction like panning for gold in California and the famed Apalachicola oysters will only be available at a few local restaurants.

But he isn't giving up all hope.

"I am proud of Apalachicola," he said. "You can pop one of our shells open and it is different from any other oysters out there."