The uptick in U.S. demand for matcha is having a spillover effect in Japan, where production of tencha, the raw green leaves that are ground into the powder known as matcha, has doubled in Kyoto prefecture during the last 10 years, rising from 564 tons in 2003 to more than 1,163 tons in 2013. 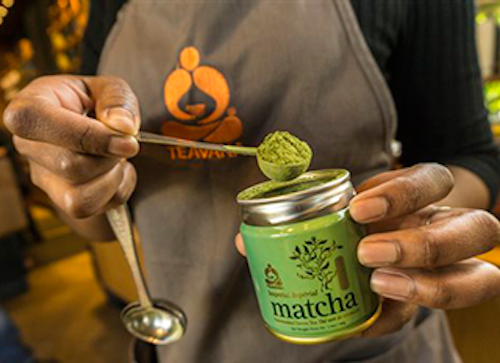 LOS ANGELES (AP) — More than a thousand years ago, Buddhist monks in Japan began a daily ritual of grinding green tea leaves into powder, mixing it into hot water with a bamboo whisk, then sharing the tea from a single cup.

Today matcha in the U.S. is considerably less monastic. It's being blended into lattes, dusted onto cheesecakes, mixed into chocolate, even infused in bourbon.

The finely ground green tea is experiencing a U.S. renaissance, with specialty matcha tea bars popping up from Los Angeles to New York and industry giants like Teavana adding it to their product lineup. Chefs are mixing matcha with grains, using it in toppings for Bundt cakes, and mixing it into cocktails, adding a punch of opulent green color along with a cool, mellow taste to playful culinary combinations.

The uptick in U.S. demand for matcha is having a spillover effect in Japan, where production of tencha, the raw green leaves that are ground into the powder known as matcha, has doubled in Kyoto prefecture during the last 10 years, rising from 564 tons in 2003 to more than 1,163 tons in 2013. Once picked by hand, advances in technology have paved the way for mass production. Specialized machines pluck the top leaves from tea shrubs and remove the veins and stems before the remnants are ground with granite stone and sealed in tin cans.

Industry leaders hope matcha one day will become a staple in the American kitchen the same way soy sauce did after World War II. They also hope the tea's long and rich culinary history doesn't get dissolved in the process.

"Ideally, people will learn how to prepare tea as well, not just drink it," said Kazumi Nishiguchi, a director at the Chamber of Kyoto Prefecture Tea Public Interest Incorporated Association. "We need to export the culture, too. And it's important that it be done right."

Matcha was first consumed during China's Tsang dynasty and later was brought to Japan by priests and monks. After a bloody war with the Mongols, tea ceremonies in China came to a halt but continued to flourish across the East China Sea in Japan. The Japanese developed intricate tea ceremonies combining prayer and meditation and perfected the process for making matcha: Tea plants were covered with a shade cloth two to four weeks before harvest, when the leaves contain the most chlorophyll and nutrients, then plucked. Monks praised matcha for its calming effect.

Today more is known about the science behind matcha. Growing tea leaves in the shade boosts their amino acids, and because the entire leaf is consumed matcha also contains about 10 times as many antioxidants as regularly brewed green tea. It also gives an energy kick, but with less caffeine than coffee.

Matcha likely first entered the U.S. market through Japanese grocery stores in cities like Los Angeles, which has one of the largest Japanese populations outside Japan. In recent years tea consumption in general has taken off: The wholesale value of tea sold in the U.S. rose from less than $2 billion in 1990 to more than $10 billion in 2014, according to an annual report by the Tea Association of the U.S.A. Green tea has comprised a smaller share of the U.S. tea market than black, though it has started to pick up as the appeal of specialty teas expands.

Still, tea interest in the U.S. has come in fits and starts; while the overall trend is up, green tea imports to the U.S. actually dipped last year by 27 percent.

Some of the biggest matcha producers are reporting big U.S. sales growth. DoMatcha, sold at WholeFoods and U.S. specialty stores, has seen an annual spike in sales of 30 percent, while Ippodo has seen growth of 20 to 25 percent in recent years and opened its first brick-and-mortar store outside Japan in New York City in 2013. Chains like Starbucks now offer green tea lattes with matcha; Teavana sells a bamboo whisking set.

Across the Pacific, Japan hasn't been immune to the forces of cultural adaptation either.

As lifestyles in Japan get busier, ready-to-go matcha beverages have replaced tea ceremonies and restaurants are experimenting with matcha powder and extract in ice cream, beer and alcohol.

"Japan respects the traditional tea ceremony," said Rona Tison, a senior vice president with Ito En, one of the world's largest green tea distributors. "But they are becoming Westernized as well."