US Lets In Thai Fish Caught By Slaves Despite Law

In its first report on trafficking around the world, the U.S. criticized Thailand as a hub for labor abuse. Yet 14 years later, seafood caught by slaves on Thai boats is still slipping into the supply chains of major American stores and supermarkets. 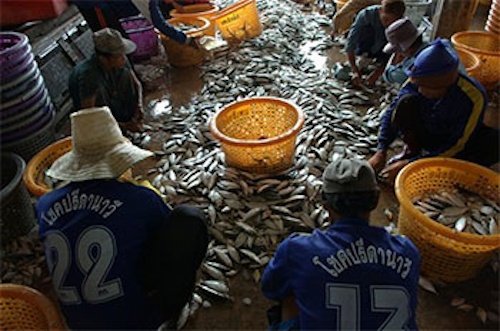 WASHINGTON (AP) — In its first report on trafficking around the world, the U.S. criticized Thailand as a hub for labor abuse. Yet 14 years later, seafood caught by slaves on Thai boats is still slipping into the supply chains of major American stores and supermarkets.

The U.S. has not enforced a law banning the import of goods made with forced labor since 2000 because of significant loopholes, The Associated Press has found. It has also spared Thailand from sanctions slapped on other countries with weak records in human trafficking because of a complex political relationship that includes cooperation against terrorism.

The question of how to deal with Thailand and labor abuse will come up at a congressional hearing Wednesday, in light of an AP investigation that found hundreds of men beaten, starved, forced to work with little or no pay and even held in a cage on the remote island village of Benjina. While officials at federal agencies would not directly answer why the law and sanctions are not applied, they pointed out that the U.S. State Department last year blacklisted Thailand as among the worst offenders in its report on trafficking in people worldwide.

Phil Robertson, deputy director of Human Rights Watch's Asia division, said the plight of about 4,000 forced laborers in Thailand's seafood industry can no longer go unheeded. Many are migrant workers from Myanmar and other countries who were forced to work on Thai boats in Indonesian waters.

"There have been problems with systematic and pervasive human trafficking in Thailand's fishing fleets for more than a decade, but Washington has evidently considered it too hard to find out exactly what was happening and is not taking action to stop it," he said. "No one can claim ignorance anymore. This is a test case for Washington as much as Bangkok."

Hlaing Min, a 32-year-old migrant fisherman from Myanmar who worked around the clock for more than two years before he ran away, also begged the U.S. for help.

"Basically, we are slaves — and slavery is the only word that I can find — but our condition is worse than slavery," he said. "On behalf of all the fishermen here, I request to the congressmen that the U.S. stop buying all fish from Thailand. ... This fish, we caught it with our blood and sweat, but we don't get a single benefit from it."

The AP investigation tracked fish caught by slaves to the supply chains of large food sellers such as Wal-Mart, Sysco and Kroger, as well as popular brands of canned pet food such as Fancy Feast, Meow Mix and Iams. The companies all said they strongly condemn labor abuse and are taking steps to prevent it. While some human rights advocates say boycotts are effective, many U.S. seafood companies say cutting off all imports from an entire country means they no longer have any power to bring about change.

During a recent visit to Jakarta, State Department Undersecretary Catherine A. Novelli was asked what the U.S. would now do.

"I'm sure that your public would be concerned that the fish that they ate came from a slave," said an Indonesian reporter.

However, the Tariff Act of 1930, which gives Customs and Border Protection the authority to seize shipments where forced labor is suspected and block further imports, has been used only 39 times in 85 years. In 11 cases, the orders detaining shipments were later revoked.

The most recent case dates back to 2000, when Customs stopped clothing from Mongolian firm Dong Fang Guo Ji based on evidence that factory managers forced employees, including children, to work 14-hour days for low wages. The order was revoked in 2001, after further review found labor abuse was no longer a problem at the company.

Detention orders that remain in place can have mixed results.

In 1999, Customs blocked hand-rolled unfiltered cigarettes from the Mangalore Ganesh Beedie Works in India, suspecting child labor. However, the AP found that Mangalore Ganesh has sent 11 large shipments of the cigarettes to Beedies LLC of Kissimee, Florida, over the past four years through the ports of New York, Miami and Savannah, Georgia. Beedies LLC said the cigarettes go straight from the U.S. ports to a bonded warehouse, and are then exported outside the country.

To start an investigation, Customs needs to receive a petition from anyone — a business, an agency, even a non-citizen — showing "reasonably but not conclusively" that imports were made at least in part with forced labor. But spokesman Michael Friel said that in the last four years, Customs has received "only a handful of petitions," and none has pointed to seafood from Thailand. The most recent petition was filed two years ago by a non-profit against cotton in Uzbekistan.

Experts also point to two gaping loopholes in the law. Goods made with forced labor must be allowed into the U.S. if consumer demand cannot be met without them. And it's hard, if not impossible, to prove fish in a particular container is tainted, because different batches generally mix together at processing plants.

"You can't expect a Customs guy at the border to know that a can of salmon caught on the high seas was brought in by a slave," he said.

The U.S. response to Thailand is also shaped by political considerations.

For years, the State Department has put Thailand on the watchlist in its annual trafficking report, saying the Thai government has made efforts to stop labor abuse. But last year, after several waivers, it dropped Thailand for the first time to the lowest rank, mentioning forced labor in the seafood industry. Countries with the same ranking, such as Cuba, Iran and North Korea, faced full sanctions, and foreign aid was withheld. Others, like Sudan, Syria and Zimbabwe, faced partial sanctions.

Thailand did not: U.S. taxpayers provided $18.5 million in foreign aid to the country last year.

"If Thailand was North Korea or Iran, they'd be treated differently," said Josh Kurlantzick, a fellow for Southeast Asia at the Council on Foreign Relations. "They're a key ally and we have a long relationship with them."

In the 1960s and '70s, when the U.S. needed Thailand's help in the Vietnam War, the country "got a pass on everything," Kurlantzick said. Then Thailand's record on human rights gradually improved, along with its economy. That changed dramatically in 2006, when the military first ousted the prime minister. It declared martial law and then overtook the government again last year.

In response, the U.S. condemned the current regime and has suspended $4.7 million in military funding to the Southeast Asian nation.

However, the U.S. still includes Thailand in military exercises, and the country is considered a critical ally against terrorism. A U.S. Senate report in December detailed how top al-Qaida suspect Abu Zubaydah was waterboarded, slammed into a wall and isolated at a secret safe house in Thailand as part of CIA interrogations in 2002. And in 2003, a senior al-Qaida operative was arrested outside Bangkok after more than 200 people died in a Bali nightclub bombing.

The U.S. also wants strong relations with Thailand as a counterweight to China, whose influence is growing in the region.

Along with the State Department, the Labor Department has also flagged seafood from Thailand year after year as produced by forced labor in violation of international standards. Department of Homeland Security senior policy adviser Kenneth Kennedy referred to discussions for an action plan on labor abuse in Thailand that began in the fall.

"I think the U.S. government recently has realized that we need to pay attention to this area," he said. "We need to address conditions that have been reported for years and that are in the public minds and in the public eye very much."

Thailand itself says it is tackling labor abuse. In 2003, the country launched a national campaign against criminal organizations, including traffickers. In 2008, it adopted a new anti-human trafficking law. And last month, the new junta government cited the fight against trafficking as a national priority.

"This government is determined and committed to solving the human trafficking issues, not by words but by actions," deputy government spokesman Maj. Gen. Sansern Kaewkamnerd said. "We are serious in prosecuting every individual involved in the network, from the boats' captains to government officials."

However, a Thai police general on a fact-finding mission earlier this month to Benjina declared conditions were good and workers "happy." A day later, Indonesian authorities rescued more than 320 abused fishermen from the island village, and the number of workers waiting to be sent home has since risen to more than 560.

Under United Nations principles adopted in 2011, governments must protect against human rights abuses by third parties. However, some local authorities in Thailand are themselves deeply implicated in such practices, said Harvard University professor John Ruggie, who wrote the principles, known as the "Ruggie Framework," as a U.N. special representative. Also, Thailand's seafood industry, with annual exports of about $7 billion, is big business for the country and depends on migrant labor.

Migrant fishermen rescued from Benjina were bewildered to learn that their abuse has been an open secret for years. Maung Htwe, a 26-year-old migrant worker from Myanmar, did backbreaking work for Thai captains in Indonesian waters over seven years, earning less than $5 a day, if he was lucky.

"Sometimes I'm really angry. It's so painful. Why was I sold and taken to Indonesia?" asked Htwe, who was among the workers rescued from Benjina. "If people already knew the story, then they should have helped us and taken action."