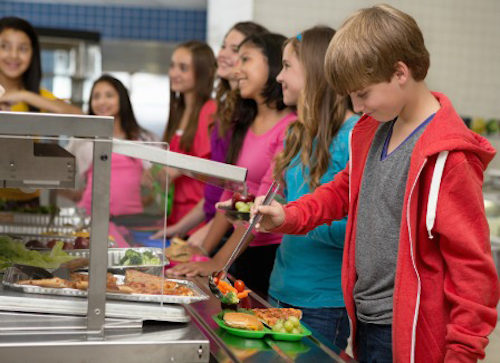 The advocates met at a Manhattan public school on Wednesday as cafeteria workers served the children a breakfast that included oatmeal and fresh fruit — a menu that they fear could be in jeopardy if Congress changes the rules when it reauthorizes the Child Nutrition Act.

The Child Nutrition Act governs school meal and child nutrition programs and is up for reauthorization every five years. The current bill, the Healthy, Hunger-Free Kids Act of 2010, is set to expire on Sept. 30.

Stephens said City Harvest is organizing a letter-writing campaign to urge Congress not to cut funding or dilute standards for school meals.

New York City department of Education officials including Dennis Barrett, the executive director of meal programs for New York City's public schools, joined the advocates at Public School 20 on the Lower East Side.

"The meals we serve are so important to these young people," Barrett said. "If they're not getting the nutrients that they need for those cells to function then the wonderful teachers and the great curriculum that we have are not getting as big an impact as they could get."

Simmons, the special projects director of Food and Wine magazine and a judge on Bravo's "Top Chef" since its 2006 premiere, said she became aware of City Harvest when she worked as a line cook at a Manhattan restaurant that used only the inner leaves of a head of lettuce or an artichoke and saved the rest for City Harvest to salvage for soup kitchens.

"I feel very privileged to get to do what I do but I also feel like it has given me insight into the disparity of food access in this city and at the same time a platform for my voice," Simmons said.