Booze, bikes and rock 'n' roll. That's the plan for economic development in this otherwise sleepy town of Trimble, Tenn. The only thing standing in the way, say distillers Michael Ballard and Jesse James Dupree, is the state's stuffy law restricting how spirits must be made so they can be marketed as "Tennessee Whiskey." 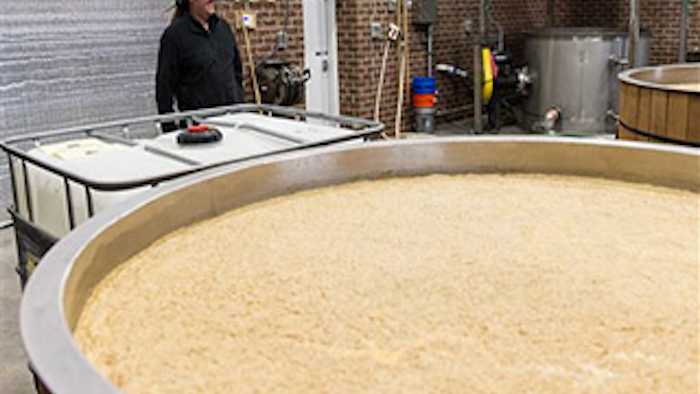 That's the plan for economic development in this otherwise sleepy town of Trimble, tucked away among the corn and soybean fields of northwestern Tennessee.

The only thing standing in the way, say distillers Michael Ballard and Jesse James Dupree, is the state's stuffy law restricting how spirits must be made so they can be marketed as "Tennessee Whiskey." They've found an unexpected ally in the conservative Koch brothers, whose political muscle they hope can help persuade lawmakers to vote for repeal.

"We're trying to get this town back on the map," said Ballard, the grandson of a Trimble sharecropper who has built his Full Throttle distillery on the former site of the town's shuttered cotton gin. "This law is just hindering us."

Ballard, the proprietor of the Full Throttle Saloon in Sturgis, South Dakota, wants to bring the biker party vibe back to his Tennessee home town by catering to hot rods, custom motorcycles and live concerts on the main drag outside his distillery and visitors center.

Business partner Dupree is the lead singer of the hard rock band Jackyl, famous for his raucous chain saw solos to close out sets. Last summer, he broke ground on his latest venture, a nearby distillery where he plans to make Jesse James Tennessee Whiskey.

But those designs were put on ice when state lawmakers didn't repeal the Tennessee whiskey statute they had enacted in 2013 at the behest of Jack Daniel's, which is by far the dominant player in the category.

"It's been over a year now that we've sat dormant because of this whiskey law," Dupree said. "That's another 30 people in this town who would be working."

The elements of the state law most under dispute are that spirits must be filtered through charcoal and stored in unused oak barrels in order to be called Tennessee whiskey. Jack Daniel's argues that the law establishes basic quality requirements. Ballard and Dupree disagree.

Ballard is building his barrel storage warehouse next to the railroad tracks, where freight trains thundering by five times a day will shake up the spirits aging in their casks. That "locomotive agitation" will be a bigger selling point than any charcoal mellowing, he said.

Diageo has taken a back seat in this year's legislative fight, but the Full Throttle crew has gained an unexpected ally in the form of the conservative lobbying group Americans for Prosperity, the organization backed by billionaire brothers Charles and David Koch.

"The original intent of the law was to say thank you to a great Tennessee tradition, but the unintended consequence is that small distilleries are being shut out within their own state," said Andrew Ogles, the state director of the group, which carries heavy sway in the Legislature.

The state's attorney general recently found that an exemption for another small whiskey maker, Prichard's Distillery, that was carved out of the original statute could be unconstitutional. That legal opinion is also giving hope to opponents that the whole law could be thrown out.

Jack Daniel's master distiller Jeff Arnett said he expects the law to withstand any legal challenges and said he stands by the state law.

"When you've been around for 150 years as we have, you understand that these things that are on your label do matter," said Arnett, who noted that despite the vocal opposition of Full Throttle and Prichard's, the law has the support of the majority of the 34 distilleries licensed in the state.

Back in Trimble, Ballard is burying unsightly power lines, putting up art deco street lamps and laying out brick-paved roads. He and Dupree are pitching a reality TV show about their efforts in the town along the lines of the show they star in about the Full Throttle Saloon in Sturgis.

Within five years, the plan is for vodka, gin, and bourbon distilleries to stand alongside ones making un-aged moonshine — and Tennessee whiskey.

"We want to call it Trimble Tennessee Whiskey, but we can't under this law," Ballard said. "The whole goal is to get tourism and getting people to come here."