How Much Sugar is in That? 7 Foods with Added Sugar

Health officials say people should eat less sugar. But that's easier said than done. Anyone who has tried cutting down on sugar knows to avoid cookies, sodas and candy. But sugar can be hidden in lots of other common packaged foods. 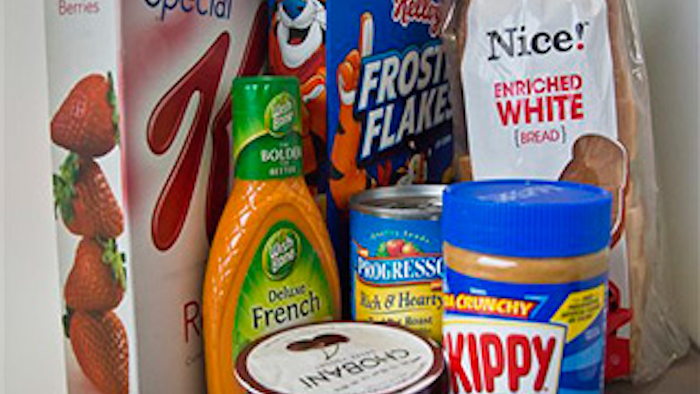 Anyone who has tried cutting down on sugar knows to avoid cookies, sodas and candy. But sugar can be hidden in lots of other common packaged foods.

The World Health Organization finalized guidelines Wednesday saying people should keep intake of added sugars to just 5 to 10 percent of overall calories, which translates to about 25 to 50 grams of sugar a day for most people. The guidelines don't apply to naturally occurring sugars in fruits, vegetables and milk, since they come with essential nutrients.

In the U.S., adults get about 11 to 15 percent of their calories from sugar; the figure for children tops that at about 16 percent. By comparison, sugar intakes ranges in Europe from about 7 percent in Hungary to nearly 25 percent in Portugal.

But many people aren't aware of how much sugar they're eating every day. In fact, that's one reason the U.S. Food and Drug Administration is proposing the first overhaul of nutrition labels in two decades. In addition to highlighting the number of calories per serving in a bigger, bolder font, the new proposed labels would also for the first time list sugars that are added by manufacturers.

In the meantime, though, companies don't currently disclose how much of the sugar listed in the nutrition panels of their products are from added sugars rather than naturally occurring ones.

Here are seven examples of foods that might have added sugar or another sweetener like high-fructose corn syrup as an ingredient:

SALAD DRESSING: Picking a salad over a ham sandwich seems like a virtuous choice. But the amount of sugar it comes with can vary depending on the dressing you put on top of it. Wish-Bone's Deluxe French salad dressing, for instance, lists 4 grams (about 1 teaspoon) of sugar per serving (2 tablespoons).

SOUP: A cup of soup of soup is comforting thought, but even savory varieties can have sugar. A can of Progresso's Rich & Hearty Beef Pot Roast has 4 grams (about 1 teaspoon) of sugar per serving, with a can containing two servings.

YOGURT: Another seemingly healthful choice that can come with lots of sugar. Some of the sugar is naturally occurring from the dairy, but companies add sweeteners too. A container of Chobani's 0% fat Greek yogurt in black cherry flavor lists 17 grams (about 4 teaspoons) of sugar.

BREAD: That toast you're about to smother with jam might've already been a little sweetened. A store brand of enriched white bread at the convenience store chain Duane Reade listed 2 grams (about half a teaspoon) of sugar for per serving (2 slices)

PEANUT BUTTER: It depends on the variety you pick, but peanut butter can come with added sugar too. Skippy's Super Chunk variety lists 7 grams (almost 2 teaspoons) of sugar per serving (2 tablespoons).

CEREAL: Most people know that cereal has sugar, especially the varieties for kids. In some cases, you might be surprised that there isn't much difference between options. Special K with Red Berries, for instance, has 9 grams (more than 2 teaspoons) per serving (1 cup), while Frosted Flakes has 10 grams (more than 2 teaspoons) of sugar per serving (3/4 cup).

FROZEN MEALS: In case it wasn't clear by now, just because it's not dessert doesn't mean it doesn't have added sugar. California Kitchen's BBQ Chicken microwavable pizza has 7 grams (almost 2 teaspoons) of sugar in a single-serving pie.