Where's the Beef? McDonald's is Bringing Back Bigger Burgers

Bigger burgers will be back on the menu at McDonald's, at least for a while. McDonald's says it's introducing a trio of "Sirloin Third Pound" burgers for a limited time starting later this month, the latest sign the chain is pushing to improve perceptions about the quality of its food. 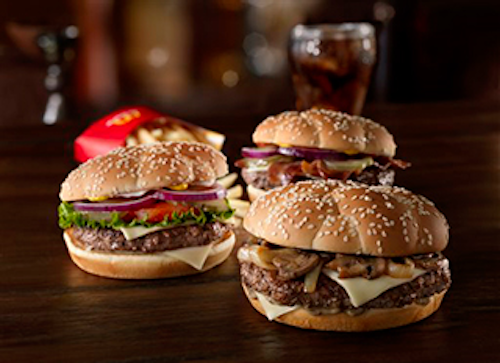 NEW YORK (AP) — Bigger burgers will be back on the menu at McDonald's, at least for a while.

McDonald's says it's introducing a trio of "Sirloin Third Pound" burgers for a limited time starting later this month, the latest sign the chain is pushing to improve perceptions about the quality of its food.

The sirloin burgers would have the biggest beef patties on the chain's menu and come after McDonald's dropped its Angus Third Pounders in 2013. At the time, some analysts said the Angus burgers were too pricey for McDonald's customers.

McDonald's says the sirloin burgers will cost around $4.99, although franchisees can determine their own prices.

McDonald's is pushing to turn around its U.S. business, which has seen sales and customer visits slip for two years in a row at established locations amid intensifying competition. Already this year, the company has made a number of announcements including a simplified grilled chicken recipe, curbing the use of antibiotics in chicken, and a pay bump and vacation time for workers at company-owned stores.

The chain has said it also plans to expand a program that lets customers build their own burgers by tapping a touchscreen.