Drones and Dogs Deployed in Battle to Save the Guacamole

On subtropical farmland in South Florida, researchers are doing battle with the deadly fungus, laurel wilt, which is spread by a tiny beetle and has the potential to decimate Florida's avocado crop. 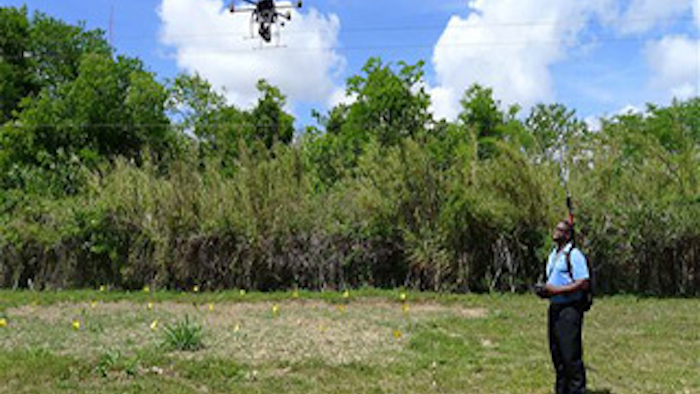 MIAMI (AP) — With the killers hiding in the trees, heat-sensing drones are launched into the air. When their whereabouts are narrowed, the dogs are sent in. When it comes to protecting the world's supply of guacamole, no weapon can be spared.

On subtropical farmland in South Florida, researchers are doing battle with the deadly fungus, laurel wilt, which is spread by a tiny beetle and has the potential to decimate Florida's avocado crop. The hashtag they have adopted for their mission: #savetheguac.

"This is probably the biggest threat to the Florida avocado that's ever been seen" said Jonathan H. Crane, a tropical fruit crop specialist at the University of Florida.

Laurel wilt is spread by the ambrosia beetle, an invasive species from Asia. It first appeared in the U.S. in Georgia in 2002, and has spread around the Southeast, mostly in redbay laurel trees. Avocados are in the same laurel tree family, and once infected by the fungus the tree can be dead within six weeks.

Researchers and farmers are fighting to halt the fungus before it advances to California, where the avocado is king.

Avocados are Florida's second-biggest fruit crop, behind citrus. The larger, smooth-skinned avocados in the Sunshine State differ from the smaller, rough-rined California Haas avocados. California produces nearly 90 percent of the nation's avocado crop and it's worth about $400 million annually — which is why it's essential to stop laurel wilt's spread.

Deep in Miami-Dade County's southern agricultural enclaves, researchers are testing methods to do just that. Florida avocados are harvested beginning in early June.

On a recent day, scientists from Florida International University and the University of Florida, along with the owners of a drone company and a canine detection team converged on a ranch under a blistering sun.

Part of the challenge of fighting laurel wilt is that by the time a farmer sees evidence of the disease — thin, hair-like prongs sticking out from tree trunks and limbs that are really the sawdust residue left behind by the burrowing beetle — it's too late to save the tree. But if farmers can catch the disease in its infancy, before symptoms emerge, there's hope of saving the tree with fungicide.

The first step is finding which part of the grove is infected. That's where the drone comes in. According to Ty Rozier, owner of Elevated Horizons, a Miami-based drone company, the vehicle carries a thermal digital imaging camera as it soars over the groves in lawnmower patterns.

Researchers analyze the images and videos to find the stressed trees. Then, they send in the dogs.

"It's almost like cancer detection," said Ken Furton, an FIU provost and professor of chemistry. "Multiple dogs have alerted on (infected) trees that show no signs of infection."

Once the dogs key in on an infected tree, farmers can remove and burn it, then inject nearby trees with fungicide in hopes of saving them or staving off the disease.

It's too costly to try to eradicate the ambrosia beetle, said Crane. The beetle works quickly, sometimes moving 30 to 50 miles a day through redbay laurel trees. Those varieties are found in Texas and "from there it's not a stretch to California or Mexico," Crane said. It's impossible to stop in those wild trees, but farmers must try to contain the disease in the avocado crops.

He added: "You can see the potential ecologic and economic devastation."

Since first detected on the edge of Miami's western suburbs in 2011, laurel wilt has killed swamp bay trees scattered across 330,000 acres of the Everglades. Hundreds of millions of redbay trees have succumbed across six Southeastern states since 2002.

And some avocado trees in Florida have been felled as well. About a mile from where researchers were testing the drones and dogs, acres of sick avocado trees were spindly, brown and dead. One researcher said it was likely the farmer couldn't afford to rip up and burn the trees, or treat the healthier ones.

This two-pronged detection system of drones and dogs could be adapted to other crop diseases, such as citrus greening, Furton said.

A $148,000 state grant is funding the study involving the drones and dogs.

"Florida's warm climate makes our state a hotbed for invasive species and diseases," said Adam Putnam, Florida's agriculture commissioner. "Florida's avocado industry has a $64 million economic impact in our state, and we will continue to aggressively protect our agriculture industry with cutting-edge research and technology."