Blue Moon, the number one selling wheat beer in the United States, is coming to Canada as Belgian Moon. 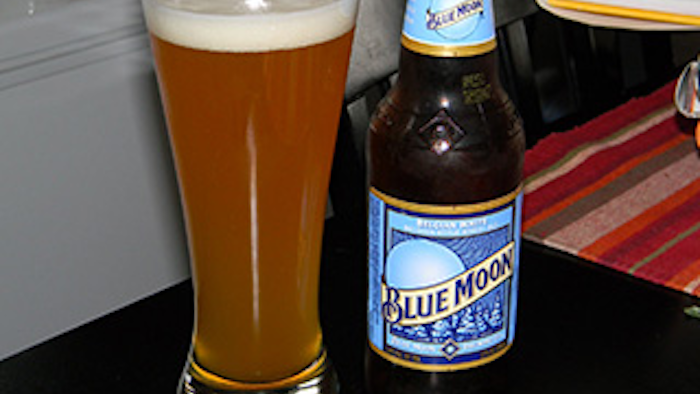 TORONTO (CNW) — Blue Moon, the number one selling wheat beer in the United States*, is coming to Canada as Belgian Moon. The beer, which has captured a large and loyal audience of drinkers globally, will be brewed to the Blue Moon global standard and available nationally at select restaurants and bars beginning August 15, 2015.

Since launching in 1995, Blue Moon has enjoyed double-digit growth in the United States and garnered a number of awards, including being a World Beer Championship gold medalist in its first year of existence.

Blue Moon was developed at the famed Sandlot brewery in Denver, Colorado by brewmaster, Keith Villa, one of only a few brewmasters to have achieved a Ph.D. in brewing, from the University of Brussels in Belgium. It is a Belgian-Style Wheat Ale crafted using the highest quality ingredients, including Valencia orange peel and coriander.

"Blue Moon was inspired by the flavourful Belgian Wits of Belgium, but created with a twist, including usingValencia orange peel, instead of the traditional tart Curaçao orange peel, for a subtle sweetness and with oats added for a creamy, inviting finish," says Villa. "As a brewmaster and beer lover, I am passionate about exploring and sharing new beer tastes and am excited to help bring this beer to Canadian drinkers."

Availability
Belgian Moon will be available on draught at select restaurants and bars across Canada starting August 15, two weeks after the world witnesses its first Blue Moon in three years on July 31.

"Introducing this iconic brand to Canada is a significant milestone for both Molson Coors, and our drinkers, whose tastebuds continue to evolve," says Will Meijer, general manager of Molson Coors' Six Pints specialty beer company. "With Belgian Moon, we are fulfilling one of our ongoing promises: to excite our drinkers with relevant, flavourful products.

Liquid and pouring ritual
Belgian Moon contains 5.4% ABV (alcohol by volume) and has a rating of 9 IBUs (International Bittering Units). The unique pouring ritual for Belgian Moon, which originated with Blue Moon, includes