The pop-up bar, Alcoholic Architecture, uses a humidifier to pump a gin and tonic vapor into an enclosed space. Patrons absorb their alcohol from the "Cloud" by breathing in the vapors and by soaking it in through the skin and eyes. 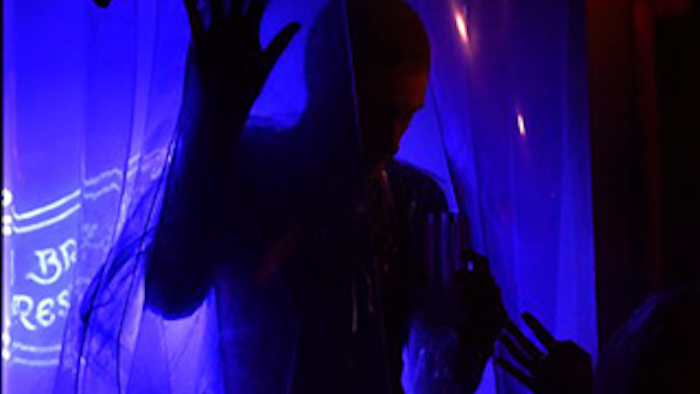 The pop-up bar, Alcoholic Architecture, uses a humidifier to pump a gin and tonic vapor into an enclosed space. Patrons absorb their alcohol from the "Cloud" by breathing in the vapors and by soaking it in through the skin and eyes.

The concept isn't new. Douglass Miller, a beverage expert at the Culinary Institute of America, recalls seeing the idea in action back in 1998.

Descending into a basement on the south bank of the Thames, customers are handed plastic ponchos to prevent the smell from permeating their hair and clothes, then are led into a corner of the bar sheathed in plastic strips.

They walk in. And breathe. Deeply.

"I think the last time I did something like this was where we accidentally spilled lots of vodka into the sauna," said Tom Foreman, 28, who works in marketing.

Sam Bompas, one of the project's designers, says the alcohol "goes straight into the blood stream, bypassing the liver." Patrons are limited to one hour in the Cloud so they don't get too inebriated.

"The alcohol avoids first pass metabolism in the liver and goes directly to the brain, which makes it much more intoxicating and the intoxication is very rapid," he said. "This has the potential to cause serious side effects as well as brain damage in the developing young brain."

Dr. Niall Campbell, an alcohol addiction specialist at the Priory Hospital in Roehampton, was even more blunt. "The last thing this country needs is another way of ingesting alcohol."