The U.S. Department of Agriculture has approved a potato genetically engineered to resist the pathogen that caused the Irish potato famine and that still damages crops. Idaho-based J.R. Simplot Co. says that the Russet Burbank can also be stored at colder temperatures longer to reduce food waste. 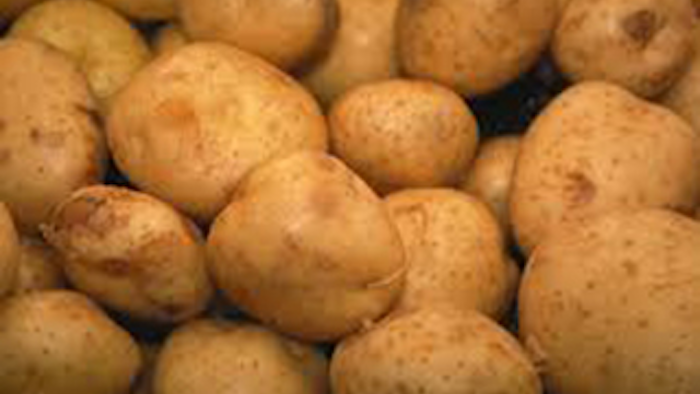 BOISE, Idaho (AP) — The U.S. Department of Agriculture has approved a potato genetically engineered by Idaho-based J.R. Simplot Co. to resist the pathogen that caused the Irish potato famine and that still damages crops around the world.

"For historical reasons and current agriculture reasons, this is an important milestone," said Haven Baker, vice president of plant sciences at Simplot. "The Irish potato famine did change a lot of Western history. Even today — a 160 years later — late blight is a $5 billion problem for the global potato industry."

The USDA made the announcement Friday on its website.

The Russet Burbank variety the USDA approved is the second generation of Simplot's Innate potatoes and also includes the first generation's reduced bruising and a greater reduction in a chemical produced at high temperatures some studies have shown can cause cancer.

The second generation potato also includes an additional trait the company says will allow potatoes to be stored at colder temperatures longer to reduce food waste.

Baker notes that the modifications were made by silencing existing genes or adding genes from other types of potatoes.

The late blight resistance, he said, came from an Argentinian variety of potato that naturally produced a defense to late blight.

"It's potato genes in the potato," he said. "There are clear benefits for everybody, and it's just a potato."

However, one of the company's oldest business partners — McDonald's — has already rejected using the company's first generation Innate potato. The company didn't immediately respond to calls for comment about the Russet Burbank potato.

Shut out of that market, the company is focusing on grocery stores.

The first generation of the Innate potatoes, approved by the Food and Drug Administration as safe for consumers in March, were marketed as White Russets. Doug Cole, the company's director of marketing and communications, said about 400 acres worth sold out last summer in grocery stores in 10 states in the Midwest and Southeast. The company plans to market about 2,000 acres of potatoes next summer.

"Our focus is on the fresh market for the coming year," Baker said. "We think the benefits are clear. We've got customers and it's a place that we're excited to be. To some degree I think we need to prove that consumers are willing to buy White Russets, and they know what they are and that they see the benefits. Then I think the other parts of the industry will come."

For the second generation Innate potato, the next step in the process is approval by the FDA as safe for consumers. The potatoes must also be approved by the U.S. Environmental Protection Agency, which regulates genetically modified organisms.

The company said they expected those approvals within a year. Commercial planting would likely begin in 2017, with the second generation potatoes available to consumers that fall. Cole said it hasn't been decided how the potatoes will be marketed.

Baker said the company is currently working on the third generation of Innate potatoes that will have a resistance to a type of virus that can make potatoes unmarketable.

He said the company hopes to eventually have potatoes that require less water and can better survive heat and drought stress, a benefit Baker said that could be important as climates appear to be more volatile.

"I think that from a scientific perspective, these biotechnology tools have a lot of promise," he said.