As waters warm off the coast of New England, black sea bass are moving north and, fishermen say, threatening the region's most valuable aquatic species: the lobster. 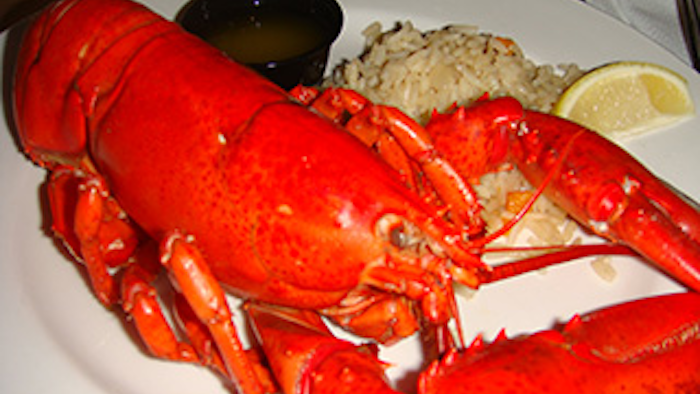 PORTLAND, Maine (AP) — As waters warm off the coast of New England, black sea bass are moving north and, fishermen say, threatening the region's most valuable aquatic species: the lobster.

The influx of sea bass — among a number of species that are appearing in greater numbers off of Maine and New Hampshire as ocean temperatures climb — has some fishermen and lobstermen saying the best solution is to ease restrictions on catching the newcomers.

The sea bass prey on lobsters, a much more economically important commercial species and a key piece of New England's culture, and quotas that have drifted downward in recent years should be increased, fishermen said.

"What we need is a major increase in the allowable catch, both commercially and recreationally, because black sea bass are wiping out your lobsters," said Marc Hoffman, a Long Island, New York, recreational bass fisherman.

Hoffman, who sits on the Atlantic States Marine Fisheries Commission advisory panel for sea bass, said the time to raise the quota is overdue. He said it is particularly important in southern New England waters, where fishing managers say the population of lobsters has fallen to the lowest levels on record.

Black sea bass are a sought-after sport fish, but they are also popular as food and are growing in commercial value — federal statistics show black sea bass were worth a record of more than $8.5 million in 2013.

Meanwhile, the valuable lobsters were worth more than $460 million that same year, another record. But the southern New England lobster stock has cratered, which the Atlantic States commission attributed to environmental factors, including temperature rise, in a recent report.

Black sea bass appear to have shifted north in range, but there has not been a scientific study of the population since 2008, said Kirby Rootes-Murdy, the Atlantic States coordinator for the species.

Maine recently established a commercial fishery for the species, and New Hampshire fishermen have inquired about the possibility of starting one, state officials said.

As black sea bass move north, it makes sense that fishermen would follow them, said Kathy Mills, a scientist at Gulf of Maine Research Institute in Portland.

"We have a situation where more of the quota is concentrated in the mid-Atlantic states," she said. "It could be the basis for developing a commercial fishery."

William Adler, a Marshfield, Massachusetts, lobsterman who sits on interstate boards for lobster and bass, agreed.

"We never used to see black sea bass. Occasionally, you'd see one in a trap," said Alder, adding that raising the quota would "save some of the lobster stock."

Rick Wahle, a marine science researcher at the University of Maine who studied lobsters, said growing black sea bass populations off of New England could indeed be a threat to lobsters. The traditional predator of New England's lobsters — the Atlantic cod — is imperiled and black sea bass could fill that void, he said.

"It might even fill the role of some of the native ground fish that have been depleted," Wahle said.

But Wahle noted that lobsters face other dangers as waters warm, including shell disease.

"It's not the only threat coming from the south," he said.