PHARM Dog USA trains Labrador retrievers and lab mixes for service skills, such as retrieving tools, carrying buckets or opening gates, while border collies are trained only to herd and help control cattle and other animals. The farmers never pay for the dogs, which are donated or rescued from shelters, and agriculture rehabilitation groups pay for the training. 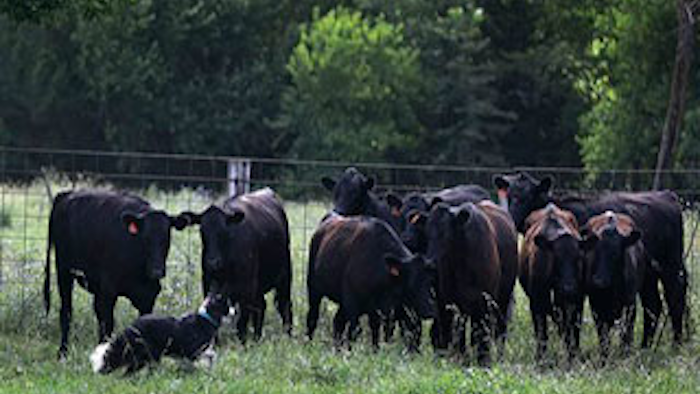 MAYSVILLE, Mo. (AP) — The demanding daily chores of a farmer were always a little different for Alda Owen, who is legally blind, able to see some blurry shapes and very close objects but not much else.

It was like that for years on the 260-acre farm she shares with her husband in northwest Missouri until a bull knocked a gate into her, requiring 60 stitches in her left leg. Owen's daughter decided her proud mother needed a helping hand — or in this case, a wagging tail: Sweet Baby Jo, a friendly, energetic border collie that helps control the couple's Angus cattle.

The pairing was made possible through a nonprofit, believed to be the only one of its kind in the United States, that trains dogs specifically for farmers with disabilities. Operating in only four Midwestern states, PHARM Dog USA, or Pets Helping Agriculture in Rural Missouri, has placed 10 dogs since 2009 and has two more in training.

"She's made it possible for me to be a productive person, to keep the life we've built," Owen said of the dog, which she received in 2012.

PHARM Dog USA has a shoestring budget, but founder Jackie Allenbrand is committed to help disabled farmers prove they can be as independent as their able-bodied peers.

"People think of farmers as rugged and tough," Allenbrand said. "When you see a big, burly farmer crying after they get a dog because they know they can keep farming, you see what a difference it's making. That's what drives us."

PHARM Dog USA trains Labrador retrievers and lab mixes for service skills, such as retrieving tools, carrying buckets or opening gates, while border collies are trained only to herd and help control cattle and other animals. The farmers never pay for the dogs, which are donated or rescued from shelters, and agriculture rehabilitation groups pay for the training. PHARM Dog also has received some grants and gets dog food donated by Cargill Nutrition.

It takes about a year to determine if a dog has the intelligence and temperament to be a service dog, according to Bobby Miller, a Plattsburg, Missouri, rancher who also trains border collies, including Sweet Baby Jo. The biggest challenge is matching a farmer's specific needs with the right dog, said Don McKay, an Iowa farmer who trains border collies.

"Dogs have different abilities, just like people," he said, adding that the first days can be bumpy but that most matches work out once the dog and farmer improve their communication.

The emotional support is as important as the work Sweet Baby Jo does, Owen said. Now 62, Owen spent most of her life hiding her disability and staying within a small comfort zone. Since she got Sweet Baby Jo, Owen has started traveling and speaking at panels about farmers with disabilities.

"It gave me back my self-esteem and pride," Owen said.

Troy Balderston, who has been in a wheelchair since a car accident in 2010 left him a quadriplegic, said he wouldn't be able to work on a feedlot in Norton, Kansas, or live on his farm near Beaver City, Nebraska, without Duke, his border collie provided by PHARM Dog and trained by McKay.

"Duke keeps me safe, he keeps the cattle from running me over," Balderston said. "He goes everywhere I go. He's a great worker and a great companion."

PHARM Dog USA has had inquiries from farmers in several other states — including New York, Colorado and Mississippi — but Allenbrand said it isn't yet financially possible to meet those needs. She hopes to someday have corporate sponsorship to expand the effort because, "there are farmers all over the country who need this service," she said. "It's important that we help them."