Anheuser-Busch InBev NV, the world's largest brewer, says that its profits rose in the first quarter in spite of falling sale volumes in important markets. The company behind Budweiser, Stella Artois, and Becks said Tuesday that even though revenues grew by 1.5 percent in the first quarter, volumes declined by 4.1 percent. 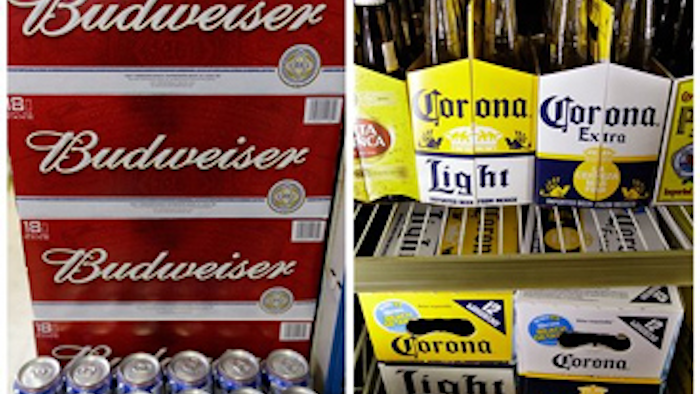 The company behind Budweiser, Stella Artois, and Becks said Tuesday that even though revenues grew by 1.5 percent in the first quarter, volumes declined by 4.1 percent.

Beer volumes in Brazil, one of its key markets, had declined by 8.2 percent while there was a fall of 5 percent in North America.

Shares in the company fell nearly 3 percent in early trading to 17.50 euros after the company revised its outlook for volume growth in Brazil.

AB InBev said that it now expects beer volume in 2013 "will be either flat or down low single-digits" compared to 2012.

"Consumers continue to be under short-term pressure in Brazil and so we have adjusted our commercial plans," a company statement said. It said the poor results of the quarter were due to an early Carnival, high food inflation and bad weather.

The company also blamed the weather in the United States for its volume slump there. Tight purses because of the economy and higher gas prices also contributed to the problems, it said.

Much of Europe also suffered through an unusually rough late winter and timid spring and beer volumes declined by 7 percent, and by as much as 9.1 percent in its home market of Belgium.

Things were even worse in Russia where the beer volume decline stood at 17 percent. One piece of good news was China, where volumes grew by 15.5 percent. The company expects strong growth there for the rest of 2013.

Net profit for the company rose to $2.05 billion compared to $1.67 billion the year earlier.