A state appeals court panel had few sweet words Tuesday for a city health regulation that would fight diabetes and obesity by setting a size limit on sugary beverages sold in restaurants. The four justices peppered a city lawyer with tough questions during a Manhattan court session aimed at determining whether health officials exceeded their authority in placing a 16-ounce limit on most sweetened beverages at city-licensed eateries. 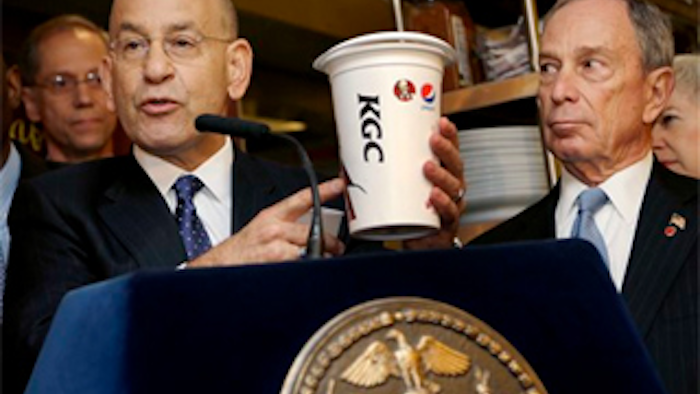 NEW YORK (AP) — A state appeals court panel had few sweet words Tuesday for a city health regulation that would fight diabetes and obesity by setting a size limit on sugary beverages sold in restaurants.

The four justices peppered a city lawyer with tough questions during a Manhattan court session aimed at determining whether health officials exceeded their authority in placing a 16-ounce limit on most sweetened beverages at city-licensed eateries.

The regulation would apply to thousands of fast food joints, fine restaurants and sports stadiums, but not to supermarkets or most convenience stores. It was struck down in March by a lower-court judge, who found that the rules had too many loopholes that would undermine the health benefits while arbitrarily applying to some businesses but not others. The city appealed.

During oral arguments in the case Tuesday, the judges repeatedly challenged city attorney Fay Ng to defend the rule's scientific and legal underpinnings.

Justice David Friedman said the city appeared to be asking for unprecedented authority to regulate all sorts of portion sizes, including "the number of doughnuts a person could eat, the number of scoops of ice cream" and number of servings of fried chicken.

Several times, Justice Dianne Renwick questioned whether the 16-ounce size limit was scientifically arbitrary, given that it is based on liquid volume rather than a measure of how much sugar is actually in a beverage. The limit, she noted, meant that some drinks with high amounts of sugar would be allowed, while others with less sweetener would be banned.

After the court session, City Health Commissioner Thomas Farley said that he remained confident the regulation will ultimately be upheld.

New York City needs the rule to address a growing health crisis, he said. The Health Department released a report Monday saying that diabetes killed an all-time high of 5,695 city residents in 2011, or about one death every 90 minutes. Around 650,000 adult New Yorkers are now living with diabetes, an increase of 44 percent since 2002.

A lawyer for the American Beverage Association and a coalition of other groups that challenged the regulation acknowledged that too much sugar can be unhealthy, but he told the court the regulation was "a breathtaking example of agency overreach."

"For the first time, this agency is telling the public how much of a safe and lawful beverage it can drink," attorney Richard Bress said. "This is the government coercing lifestyle decisions."

He said the city's proposal seemed to be based more on politics and consumer economics than pure science. He noted that the rules, which contain an exception for dairy products, would prohibit restaurants from serving more than 16 ounces of cranberry or orange juice in a glass, while setting no limits on the size of a milkshake.

"That makes no sense at all as a matter of nutrition," he said.