Stomping Out Grape Disease One Vineyard at a Time 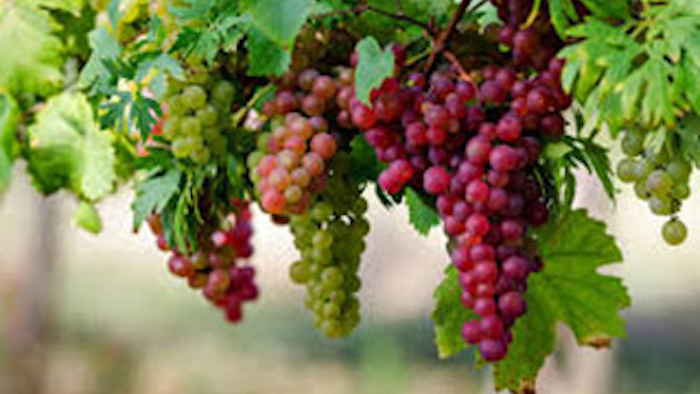 A Rochester Institute of Technology scientist and an RIT alumnus are close to completing the genetic blueprint, or microbiome, of grape crown gall tumor disease — the bane of vineyards worldwide. Their study focuses on 16 grape varieties, including Cabernet Sauvignon and Riesling, from vineyards in the New York Finger Lakes Region, Cornell University’s New York State Agricultural Experiment Station in Geneva, N.Y., and Missouri. Grape varieties Muscat Ottonel, Vitroblack and Muscat of Alexandria were also sampled from vineyards in Hungary, Tunisia and Japan, respectively.

According to the Congressional Wine Caucus, a coalition of U.S. representatives and senators, the U.S. wine, grape and grape products industries yielded more than $162 billion annually to the U.S. economy in 2007. More recently, in February, the New York Wine and Grape Foundation reported a $4.8 billion economic impact on New York state, based on 2012 data.

“We are about six months away from having the data to completely describe the bacterial microbiome of grapevine tumors,” said Michael Savka, professor of biological sciences in the Thomas H. Gosnell School of Life Sciences at RIT, and organizer and contributor of the international study. “By understanding the microbial composition of the diseased state on and in the grapevine crown gall tumor, we can begin to formulate informed biological control treatments — better mixtures of protective bacterial species — to reduce the infection that leads to the development of crown gall tumors in vineyards.”

The total environmental DNA of grape crown gall tumor disease is revealed in the genetic profile based on 52 tissue samples of crown gall tumor taken from 16 grapevine species. The infected grape species were grown in five geographical locations and on four different continents, including North America, Europe, Africa and Asia. A complete ecological understanding of the microbial population associated with Agrobacterium vitis could improve disease management and crop production of all varieties of grapes, Savka said.

Grape crown gall is a chronic disease that lacks effective treatment and is difficult to eradicate. Bacteria enter the vine through grafts or wounds and spread through the plant’s vascular tissue. The systemic infection develops into swollen knots, or galls, that starve the plant of water and nutrients necessary for proper growth and development. The sometimes-latent disease can kill vineyards, stress mature vines and persist in soil and in decaying plant matter for years.

Central to the study are the contributions of Savka’s collaborator and former student, Han Ming Gan, research fellow at Monash University Malaysia and a 2008 RIT biotechnology alumnus. Gan, an expert in next-generation DNA sequencing platforms, developed a technical approach that separates DNA of bacteria from close relatives in the archaea—a group of single-celled microorganisms—from plant cell DNA. He identified a core microbiome common to all 52 sampled tumors that consists of three different species of Agrobacterium, one species of Erwinia and Novosphingbium, and one member from Enterobacteriaceae andMicrobacteriaceae.

“Now that we have defined the core microbiome of crown gall tumor, the next step would be to predict the role the other non-Agrobacterium strains in the crown gall based on their identity,” Gan said.

The team is also assessing whether differences exist in climate, grape cultivar and in tumor type. Additional samples have been collected this year in Hungary and Tunisia, Savka noted.

Findings from the study were published as part of the proceedings of the American Society for Microbiology 2014 meeting in Boston.