The report to Congress was blunt: The U.S. Environmental Protection Agency had failed to regulate pollution from the nation's livestock farms — many capable of generating more waste than some cities — because it lacked information as basic as how many farms even existed. 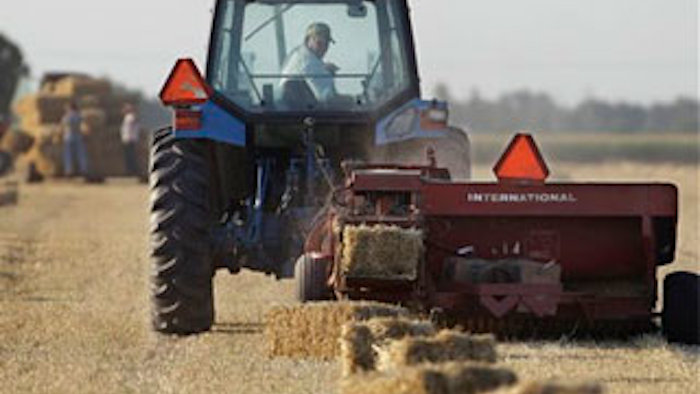 CHICAGO (AP) — The report to Congress was blunt: The U.S. Environmental Protection Agency had failed to regulate pollution from the nation's livestock farms — many capable of generating more waste than some cities — because it lacked information as basic as how many farms even existed.

Four years after the U.S. Government Accountability Office raised concerns and 40 years after the Clean Water Act gave the EPA the authority to protect the nation's waterways, the agency still doesn't know the location of many livestock farms, let alone how much manure they generate or how the waste is handled, because most of that information is kept by various state and/or local agencies — or not collected at all.

At the same time, water-quality experts throughout the country cite livestock waste as a major contributor to water-quality problems, including in areas like the Chesapeake Bay, where manure runoff is believed responsible for up to one-fourth of phosphorus, which stimulates algae growth. If the EPA knew all the sources of that waste, it might be easier to stop it, environmentalists say.

So they were flabbergasted when the EPA recently decided against adopting a rule that would require livestock operators to provide the agency with information, opting instead to try to cobble it together from other state, local and federal sources — a decision they said puts the EPA right back where it started.

"It's been (decades) since we first started regulating them and we're not at a point where we know where they're at?" said Kelly Foster, senior attorney at Waterkeeper Alliance, one of several environmental groups that sued the EPA to get it to start collecting information on concentrated animal feeding operations, or CAFOs.

It's not unusual for CAFOs to have thousands of cattle, tens of thousands of hogs or millions of chickens in one location. The animals' waste is often stored in underground pits or outdoor lagoons until it's spread as fertilizer on cropland, ideally in a manner that avoids runoff into waterways. But pollution from faulty manure storage or runoff happens often enough to generate complaints, and environmentalists suspect many more problems go undetected.

To settle Waterkeeper's lawsuit, the EPA agreed to propose the rule requiring livestock operations to report information to the agency. But, it didn't promise to adopt it.

Industry officials said there's no reason for farmers to have to give the EPA information, especially if another government agency already has it or a farm isn't doing anything wrong.

"We're not keeping them from getting the information, but we don't need to turn it all over," said Michael Formica, an environmental lawyer for the National Pork Producers Council, which threatened to sue if the rule was adopted.

EPA spokeswoman Cathy Milbourn said nobody was available to discuss the decision. But the agency issued a statement saying it was withdrawing the proposed rule "in light of comments received from states regarding the amount of information states already have."

The EPA signed an agreement with the Association of Clean Water Administrators, whose members include state water-quality officials, to have that group help identify where the information is kept and how the EPA could get it. Alexandra Dunn, ACWA executive director and general counsel, said her organization believes it's better to assess how much information is already available before requiring farmers to report it, but acknowledged the EPA will only be able to get information other agencies are willing to share.

It's unclear how that would play out in some Republican-led states, where officials have been increasingly critical of the EPA's efforts to regulate everything from greenhouse gases to gas drilling. Even in largely Democrat-led states, like Illinois, getting information may be difficult.

The Illinois agriculture department approves farm construction and informs the state EPA, which handles environmental enforcement for the federal agency. But even agriculture officials don't know where all of Illinois' livestock farms are located because many were built before the state began requiring preapproval in 1996, said Warren Goetsch, chief of the state's environmental programs bureau. What's more, most farms don't submit manure management plans to the state, only promising to keep them on hand.

Formica, the pork industry lawyer, said the EPA can request information during farm inspections or if it has a reason to suspect a specific farm is polluting.

But there are hundreds of thousands of livestock farms nationally and not nearly enough federal or state inspectors to regularly check them all. Environmentalists said if basic information was reported to the EPA, it could help target inspections. For example, if a farmer didn't appear to have enough land to handle the amount of waste his animals generated, that could raise a red flag.

The agency suffered another setback in 2008, when a federal court struck down an EPA rule requiring all livestock operations over a certain size to get a Clean Water Act permit, which would have answered many questions. The court said farms aren't like factories or wastewater treatment plants, which are designed to discharge some contamination into waterways, so they shouldn't have to get a permit unless they pollute.

"The real problem is how (the EPA) can know" whether a farm has polluted, said Jon Devine, a senior attorney at the Natural Resources Defense Council, another one of the organizations that sued the EPA. "It's a catch-me-if-you-can scenario."

The EPA has used airplanes to fly over livestock operations to look for manure runoff. The agency said such surveillance helped minimize costs and the number of on-site inspections, in part by focusing on areas with many feedlots or watersheds tainted by animal waste.

But ranchers in some areas were outraged when they heard about the program earlier this year, and Republican lawmakers have since introduced a bill in the U.S. House to prohibit the EPA from using flyovers to enforce the Clean Water Act unless the agency has written voluntary consent, provides public notice or obtains a court order.

Although farmers are supposed to report runoff into waterways, residents' complaints or dead fish are usually the first sign of problems, said Bruce Yurdin, a manager in the Illinois EPA's bureau of water who said his department sees one or two manure spills a month.

In 2009, an estimated 200,000 gallons of manure spilled from a holding pond at an eastern Illinois hog farm into a nearby creek, killing more than 110,000 fish over 19 miles. The farm agreed last year to pay more than $81,000 in fines to the state to settle the case.

But to address such problems, "you have to find them," Yurdin said. He estimated there are 3,500 CAFOs in Illinois, though his department isn't sure, and that the state inspects about 200 per year.

Devine said it all adds up to a messy situation.

"EPA passed up an efficient, uniform, and accurate mechanism for obtaining needed information ... and opted instead for a messy, time-consuming, and surely incomplete process," he said.