McDonald's Corp. said Monday it will require its U.S. pork suppliers to provide plans by May to phase out crates that tightly confine pregnant sows, a move that one animal rights group predicted would have "a seismic impact" on the industry. 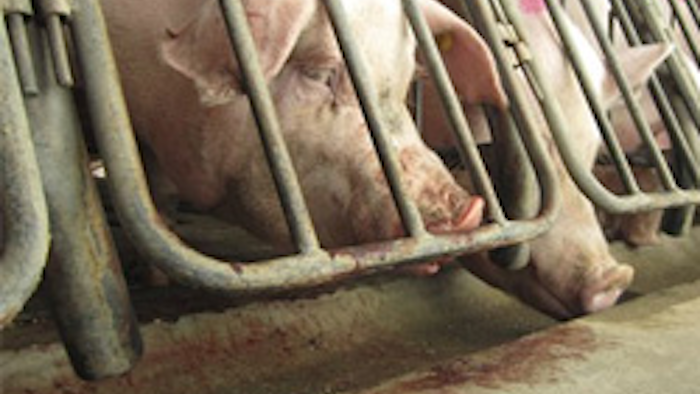 DES MOINES, Iowa (AP) — McDonald's Corp. said Monday it will require its U.S. pork suppliers to provide plans by May to phase out crates that tightly confine pregnant sows, a move that one animal rights group predicted would have "a seismic impact" on the industry.

The U.S. pork industry generates sales of about $21 billion a year, according to the National Pork Producers Council. McDonald's, with its Sausage McMuffin, McRib sandwich and breakfast platters, is one of the nation's largest buyer of pork products, consuming about 1 percent of the nation's total production.

The fast food chain announced its decision in a joint statement with the Humane Society of the United States, which hailed it as a major victory in its fight against so-called gestation crates. The animal welfare group has been pushing legislation in several states to outlaw the crates that severely limit animals' movement.

"I think it's going to have a seismic impact on the pork industry because it signals to every other major food retailer that this is the morally correct pathway, but it's also an economically feasible pathway," said Wayne Pacelle, the Humane Society's CEO.

Many of McDonald's competitors, including Burger King, Wendy's and Hardee's, have already begun to move away from suppliers who use gestation crates, and the fast food chain's announcement came a day after Chipotle Mexican Grill made a splash with a nearly two-and-a-half minute television commercial aired during the Grammy's and touting its ban on pork produced using the crates.

The commercial, an animated short film featuring the Coldplay song "The Scientist" sung by Willie Nelson, was released online in August. It features a farmer who experiences a crisis of conscience, prompting him to abandon factory-like farming methods and free his pigs, chickens and cows from confinement. It had more than 4.6 million views on YouTube by Monday afternoon.

"We are changing the way people think about and eat fast food," Steve Ells, founder, chairman and co-CEO of Chipotle, said in a statement. "We have always understood the importance of serving food that is raised right, but that is a difficult thing to communicate with the limitations of traditional advertising."

Unlike Chipotle, McDonald's is not ending its relationship with suppliers who use gestation crates.

"We're really looking to see a positive change regarding moving away from gestation stalls, and we think the best way to do that is working with our suppliers," McDonald's spokeswoman Lisa McComb said. "They're the ones that actually have to take action to make this happen."

Some of McDonald's suppliers and other major pork producers have already announced plans to phase out gestation crates.

Smithfield Foods Inc., the world's largest pork producer, and Hormel Foods Corp. have both said they would stop using them at company-owned farms by 2017. Cargill Inc. says it has already widely adopted group housing for pregnant sows.

McDonald's said it is seeking reports from all its suppliers by May on measures being taken to end the use of gestation crates. After a review, it will decide how to proceed.

Even such a cautious approach was welcomed by animal rights groups, given McDonald's huge buying power. Nathan Runkle, executive director of Mercy For Animals, a Chicago-based nonprofit animal rights group, said he hoped the company would take a similar approach with egg suppliers, who often keep chickens in similar cramped cages.

"They do have the power to move an entire industry, to set an example that other food providers often follow," Runkle said. "We hope it's the beginning of the end of these cruel and abusive practices."

Pig farmers keep pregnant sows in gestation crates in an effort to reduce aggressive behavior by separating them from other hogs and feeding them individually.

The National Pork Producers Council, which has been concerned about the possibility of federal legislation limiting farming practices, said studies have shown individual and group housing can provide good care for sows. It said it will help McDonald's assess housing practices, and the most important part of Monday's announcement was that the change was driven by the market and not by government mandates.

"Pork industry customers have expressed a desire to see changes in how pigs are raised," the group said in a statement. "Farmers are responding and modifying their practices accordingly. That process is effective, it is efficient and doesn't require an act of Congress."