Rising demand and falling supply are spurring talk in the arid West of outside-the-box ideas including piping in water from the nation's heartland and towing Arctic icebergs south to help such thirsty U.S. cities as Denver, Los Angeles, Las Vegas and Phoenix. 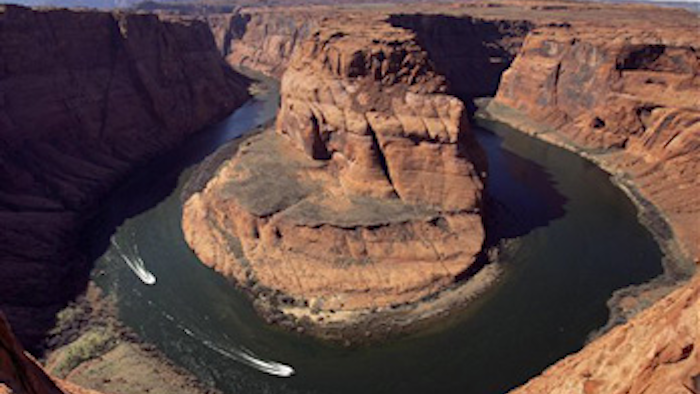 LAS VEGAS (AP) — Rising demand and falling supply are spurring talk in the arid West of outside-the-box ideas including piping in water from the nation's heartland and towing Arctic icebergs south to help such thirsty U.S. cities as Denver, Los Angeles, Las Vegas and Phoenix.

But amid ongoing drought, some advocates are criticizing a report being released Wednesday on the next 50 years of Colorado River water use as a "fundamentally flawed" analysis based on inflated projections of the amount of water in the river and the number of people in the region.

"States cooked the books to show higher demand for water consumption to set up a federal bailout on expensive water projects," said Molly Mugglestone, director of the advocacy group Protect the Flows. "Meanwhile, the states failed to account for river flow that will be required to sustain our multi-billion dollar recreation economy."

Another advocacy group, the Environmental Defense Fund, was more measured in its expectations for the Colorado River Basin Water Supply and Demand Study.

"The Colorado River is the lifeblood of the dry West," said Dan Grossman, an official with the Boulder, Colo.-based organization. He said the report would show the critical need for increased conservation.

"We can't keep bleeding the river dry," Grossman said. "The basin study says loud and clear that it's time for a new approach that puts conservation first."

Interior Secretary Ken Salazar was due to head a media briefing about the report being released as part of a three-day Colorado River Water Users Association conference.

It tallies some 40 million people in cities and rural parts of Arizona, California, Colorado, New Mexico, Nevada, Utah, and Wyoming as dependent on the Colorado River for drinking water, crop irrigation, ranching, tourism, energy and business.

Federal officials call the study, funded and prepared by the Bureau of Reclamation and the seven basin states, the product of three years of study about supply and demand in the Colorado River basin over the next 50 years.

Even before the report became public, proposals like a multi-billion dollar pipeline running some 670 miles from the Missouri River to Colorado were met with skepticism. But study participants considered all kinds of options ranging from eliminating thirsty invasive but prolific plants like tamarisk to corralling icebergs, siphoning Alaska river water into tanker ships for transport south and desalting seawater.

Water officials also talked about swapping water credits and "banking" the valuable resource. The discussion was separate from a treaty signed by U.S. and Mexico officials last month setting new rules on sharing Colorado River water south of the border and allowing Mexico to store water in Lake Mead near Las Vegas.

Critics including Mugglestone and a coalition of businesses, farmers, environmentalists and Latinos didn't wait for the study itself to deride it as "rigged by Colorado River basin states and utilities to support costly, unrealistic and outdated solutions."

A statement issued in Denver by Protect the Flows, the National Young Farmers' Coalition, Nuestro Rio and Save the Colorado argued that the report used prerecession population growth projections and overstated by more than 36 percent the amount of water in the drought-stricken river.

Discrepancies between actual and projected demand were being used to support costly and drastic measures like desalination or piping water from states outside the southwest, it said.

In Wyoming, the Family Farm Alliance hailed the study on behalf of farmers, ranchers and irrigation districts in more than a dozen Western states. It pointed to the implications for food production in study estimates that irrigated acreage in the Colorado River basin will decrease by 2060.

"A key overall benefit of this study is that, from now on, all Colorado basin parties can work from the same technical foundation," alliance President Patrick O'Toole said. "Policy makers and Colorado River stakeholders must understand the critical implications of taking 6 to 15 percent of existing irrigated agriculture out of production."

"Water quantity and water quality are linked," Niemirski said in an interview. "The amount of water available ... is critical. We can't just continue to build straws into the river."

"This is the start of the conversation," Niemirski added, "about how the tens of millions of people who depend on the river for water are ultimately going to be able to live there."