While Superstorm Sandy did highly visible damage to homes, boardwalks and roads, it also walloped the Northeastern fishing industry, whose workers are hoping for a small piece of any future disaster assistance that Congress might approve. The storm did millions of dollars' worth of damage to docks, fish processing plants and restaurants. 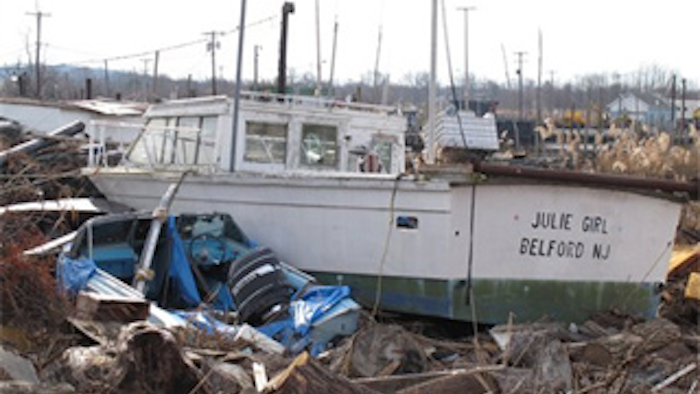 MIDDLETOWN, N.J. (AP) — While Superstorm Sandy did highly visible damage to homes, boardwalks and roads, it also walloped the Northeastern fishing industry, whose workers are hoping for a small piece of any future disaster assistance that Congress might approve.

The storm did millions of dollars' worth of damage to docks, fish processing plants and restaurants. But it also caused millions more in lost wages to boat employees who couldn't work for two to three weeks, to truck drivers who had nothing to transport, and to other assorted industries that service commercial fishing.

The $9.7 billion measure to fund the National Flood Insurance program, passed by Congress on Friday, did not include anything for the fishing industry; a bill the Senate passed in December would have allocated $150 million for that purpose.

Some of the worst damage to fisheries in the region occurred at the Belford Seafood Cooperative on the Raritan Bay shoreline in Middletown, where the pounding waves destroyed a 75-foot-long dock, gutted a popular restaurant, and ripped away all five garage doors and parts of the exterior of office and storage buildings. The co-op's manager, Joe Branin, estimates the damage at close to $1 million.

The restaurant, where diners could eat scallops and fillets literally right off the boat, had provided $5,000 to $8,000 a week in revenue that is now gone.

The co-op supported 50 families who either work directly for it or in supporting roles. Many of those workers simply did without a paycheck for weeks afterward. The situation was the same at New Jersey's Viking Village port on Long Beach Island's Barnegat Light, where boats were idled after the storm.

"We couldn't get to work for two weeks because the infrastructure was all torn up here," said Bob Brewster, who owns three of the port's 45 fishing boats and estimates he lost between $10,000 and $20,000 in lost catch. "We were just twiddling our thumbs, waiting to get back out on the water. Everybody wants to make a living, and for a while, we couldn't."

In Hampton Bays, N.Y., Doug Oakland estimated two marinas he owns suffered between $800,000 and $1 million in damage. He estimates about a dozen other marinas in the eastern Long Island community were similarly affected.

"The marinas got beat up pretty hard. There's a 75-foot section of our pier that's just gone," he said.

"There was about three to four weeks right after the storm where all the fish kind of disappeared," he said. "The first two weeks, fishermen couldn't even get out because a lot of their gear was buried in sand. With the gas shortage, there were no fuel trucks, and there really was no market to sell the fish to because nobody had power. There was no sense in even trying to catch them."

Though most of the individual boats up and down the East Coast escaped damage, they were forced to stay at the dock because of a combination of problems.

That included damage to their home ports; torn-up roads that forced street closures and kept workers, truck drivers, and customers from reaching the docks; the disruption to normal fishing patterns after the storm that saw many profitable species chased away until the following year; and even difficulty in getting in and out of ports because of new sand bars.

A strong nor'easter a week after Sandy just made things worse.

"We couldn't get trucks to transport the product," said Dwight Kooyman, who manages two of Viking Village's scallop boats. "I have five guys that work for me that couldn't work that entire time. If they don't work, they don't get paid."

They're all waiting to see whether Congress includes them in the billions of dollars in storm reconstruction aid it is considering. Less than three weeks after the Oct. 29 storm, the U.S. Commerce Department declared a fishery resource disaster for New Jersey and New York. But all that did was authorize the federal government to disburse any aid that Congress approves. Specific plans for applying for and distributing any aid to fishermen still have to be formulated.

Dale Parsons is a fifth-generation fisherman at the Jersey shore, who owns a shellfish business in Tuckerton, and who used to own a commercial hatchery for tiny clams and oysters on the edge of Barnegat Bay — until Sandy destroyed it, causing several hundred thousand dollars' worth of losses.

"It was millions of oysters and clams that won't be spawned next year," he said. "Even if we rebuild right now, it will take a good year, year and a half to get it together. It's going to take a long time coming."

The damage to seafood processors and docks is only part of the industry's problems, Parsons said; he also fears reduced business from restaurants who see fewer tourists this summer and order less seafood.

"I'm just waiting to see what kind of business there's going to be in the spring," he said. "No one knows yet."

"The trains weren't running, there was no gas to get out to the docks, so I'd say they lost substantial income," she said.

In some places, Sandy actually appears to have helped, rather than hurt, the fishing industry. Maryland environmental officials say an influx of fresh water into the Chesapeake Bay may benefit the oyster population by helping to keep the disease known as dermo in check.

Gibby Dean, president of the Chesapeake Bay Commercial Fishermen's Association, said the oyster harvest is the best it's been in a long time — so good that people are giving up crabbing to go after oysters.