President Evo Morales has a personal stake in seeing the destigmatization of the crop. He and his fellow growers say they want to build a healthy market for coca-based products, despite the belief of U.S. officials that most of Bolivia's crop ends up as narcotics. Yet a stubborn problem keeps getting in the way of the president's grand plan: While coca tea is popular, most people seem to find other coca-based food unappetizing. 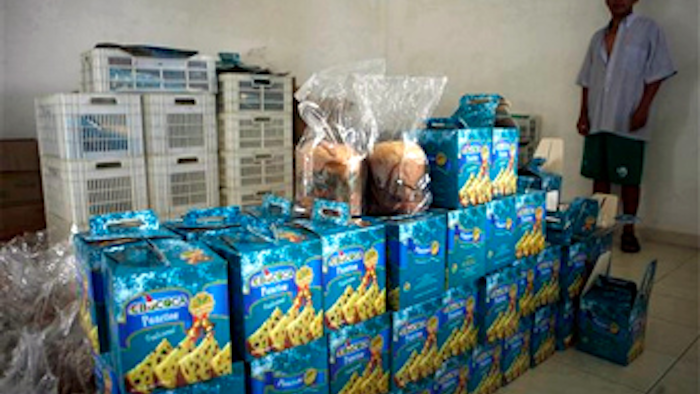 VILLA TUNARI, Bolivia (AP) — Since taking office seven years ago, President Evo Morales has tried to persuade the world that he has no tolerance for cocaine and that Bolivia's thousands of acres of coca plants can be dedicated to such traditional uses as fighting fatigue as well as whipping up wholesome treats like sweet breads and coca puffed snacks.

The longtime leader of Bolivia's biggest coca growers union, Morales has a personal stake in seeing the destigmatization of the crop. He and his fellow growers say they want to build a healthy market for coca-based products, despite the belief of U.S. officials that most of Bolivia's crop ends up as narcotics.

Yet a stubborn problem keeps getting in the way of the president's grand plan: While coca tea is popular, most people seem to find other coca-based food unappetizing.

The processing plant he built in 2008 with a $900,000 donation from his late friend, Venezuela's Hugo Chavez, and other such endeavors have not prospered.

The now-idle factory in Villa Tunari, in the heart of Bolivia's coca-growing Chapare region, churned out a million bags of baked coca treats in 2011 and 2012 and also made candies and liquors using the tough, bitter-tasting plant. To enhance edibility, workers added sweeteners, corn and cheese flavoring.

But to the chagrin of the government and the union that runs the plant, the coca food market refused to grow. Just about the only people who would eat the treats were 30,000 schoolchildren in the Chapare valley whose school districts bought cheese-flavored coca puff snacks from the plant and gave them away for free.

"The truth is, first they were hard," said 12-year-old Mario Justiniano, who had tried a coca puff. "The coca tasted a little strong, but a little later they got better and became tastier."

Eliseo Zeballos, the coca union leader in charge of the Ebococa factory that made the treats, said he had learned a rule of thumb about making tasty coca-based food: "It doesn't help putting in much coca."

For the 53-year-old Morales, championing legal coca cultivation has been a decades-long mission, beginning in his days as a union leader battling U.S.-funded eradication efforts in the low-lying Chapare.

Now, as president, he controls coca cultivation with government restrictions on the size of growers' plots. U.S. drug agents, whom he expelled in 2008 for allegedly inciting his political opponents, say that has hardly stemmed a vibrant narcotics trade.

Coca growers such as Morales point out that indigenous communities have for centuries chewed coca to fight off the effects of altitude sickness and fatigue and use it in religious rituals.

A 1975 Harvard University study also found the leaves to have a surprisingly high nutritional value, rich in calcium, iron and vitamins A, B2 and E. However, it said the "toxic alkaloids" comprising 0.25 to 2.25 percent of the plant "could make the nutritious coca leaf undesirable as a source of nutrients."

U.S. counterdrug officials insist most of Bolivia's coca crop goes to cocaine production and say the country has also become a haven for Colombian drug traffickers who also use Bolivia to refine coca paste imported from Peru.

Bolivia has the world's third-largest coca crop after Peru and Colombia, with more than 67,000 acres (27,000 hectares) under cultivation, according to the U.N. Office on Drugs and Crime. Unlike Colombia, however, most of its cocaine heads not to the United States but to Brazil, Argentina and Europe.

Often-violent confrontations between coca growers and U.S.-funded counterdrug police frequently wracked this deeply impoverished 10 million-person country, bolstering support for Morales and helping him win election and assume the presidency in 2006.

Morales has since crisscrossed the globe preaching the benefits of coca, including chewing its leaves during speeches before international drug control bodies.

This year, he scored a diplomatic win by securing Bolivia's readmittance to the 1961 Single Convention on Narcotic Drugs with an exemption that made coca leaf chewing legal in Bolivia under international law.

"I have seen coca tea in Ecuador, in Venezuela," Morales said a month ago. "Coca tea is arriving in South Africa from Peru."

Winning the battle at home, however, has proved tougher.

The Morales government has tried to promote coca foods at culinary festivals and offers incentives for private companies that produce the treats. He also built a second factory in the capital, La Paz, as part of his promise to help fellow coca growers produce everything from hand lotion to syrup. So far, all that's planned there is production of coca tea, with artificial sweetener.

That's a twist on a popular, traditional means of consuming coca: in tea to fight altitude sickness, as well as held between lip and gum, where it helps farmers and miners fight off fatigue.

A prime opportunity appeared two years ago, when two coca-based soft drinks, Coca Brynco and Coca Colla, were launched. History was in their favor: The U.S. brand Coca-Cola has long included coca leaf extract in its recipe. Paul Gootenberg, in his book "Andean Cocaine," says cocaine itself was removed from the soft drink in 1903.

This time around, both soft drinks failed to generate sales and promptly disappeared from Bolivian store shelves.

"At first, it wasn't very accepted because of its slightly bitter flavor," said Victor Ledezma, who launched Coca Colla in 2010 with a $250,000 investment and 15 employees. "But I'm improving the formula and thinking of returning to the market."

Alan Garcia, Peru's president from 2006 to 2011, had been a coca booster, even suggesting tossing coca leaves into salads. That never went anywhere.

Bolivian businesswoman Heidy Quisbert is not deterred, though, by the evidence that coca leaf may not be cut out for anything other than chewing, tea and cocaine.

She's spent nine years working on her coca-based pastries, playing with essences and recipes while fighting off public health officials who insist she move her bakery out of a rented house and to more sanitary quarters.

Lately, Quisbert has come to the same conclusion as Zeballos about what it takes to make coca food palatable despite its "spicy and bitter flavor."