Venezuela's biggest food company on Monday hit back at President Nicolas Maduro's claims that it's to blame for the country's persistent food shortages. The chief executive of Empresas Polar, Lorenzo Mendoza, rejected accusations by the president that the company has reduced production and is hoarding products to create scarcity. 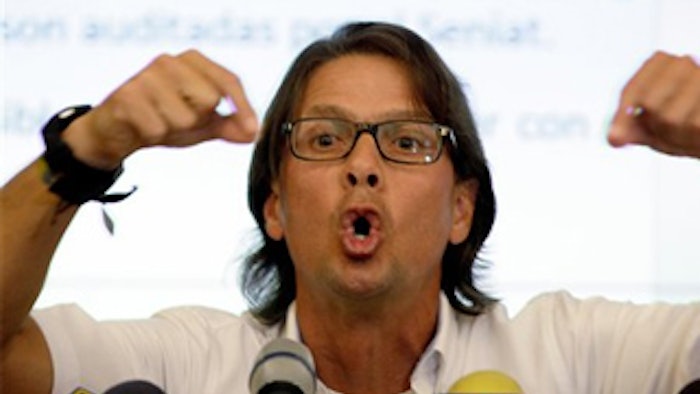 CARACAS, Venezuela (AP) — Venezuela's biggest food company on Monday hit back at President Nicolas Maduro's claims that it's to blame for the country's persistent food shortages.

The chief executive of Empresas Polar, Lorenzo Mendoza, rejected accusations by the president that the company has reduced production and is hoarding products to create scarcity.

"The accusations that we are producing less than last year are false," Mendoza told reporters. "I presume that President Nicolas Maduro is not well informed about the situation and about what's happening."

Mendoza said his company has increased production of cornmeal by 10 percent in the past four months, and he offered to buy or rent government-owned corn processing plants to boost output event further.

Shortages of basic foods including sugar, milk, butter and cornmeal are a recurring annoyance to consumers in this oil-rich nation of 30 million people. Cornmeal is a crucial ingredient in arepas, or corn cakes, a local specialty.

Food makers say the shortages stem from the socialist government's price controls, designed to make basic goods affordable to the poorest parts of society. They also point to the government's control of foreign currency they need to buy pesticides, fertilizers, animal food and machinery from abroad.

Maduro, the hand-picked successor of the late Hugo Chavez, has put the blame for shortages squarely on the private sector, which he accused Monday of sabotaging the domestic market through "economic warfare."

Chavez, who died March 5, made agrarian reform a pillar of his "revolution" and vowed to turn Venezuela into a self-sufficient, food-exporting power. But the country still imports nearly 70 percent of its food, and it has to import products it did not need to before Chavez's 14-year presidency, including beef, coffee and rice.

"The underlying economic policies are producing the consequences foreshadowed by all serious economists," said Diana Villiers Negroponte, senior fellow and Latin America expert at the Brookings Institution in Washington.

Food shortages are just one of a series of problems facing Maduro, who narrowly won an April 14 presidential election that the opposition refuses to accept, claiming fraud and voter intimidation. Venezuela also grapples with power blackouts, high inflation and rampant crime.

Also on Monday, Maduro launched a previously announced security initiative that includes the use of military units to fight crime, which he called "the most important problem that our society has to resolve."

Venezuela has the world's fifth highest homicide rate, according to U.N. statistics.

In its initial phase, 1,200 soldiers and 800 police will take part in the "Secure Homeland" program, Maduro said during an open-air ceremony at the Military Academy of the Army in Caracas. He said the initiative is beginning in the capital and then will expand to the states of Zulia, Lara and Carabobo next week, with the aim of including 3,000 soldiers.

Critics have warned that using soldiers trained for warfare in law enforcement could lead to human rights violations.

Before they rode out of the academy on motorcycles, the soldiers were urged by Interior Minister Miguel Rodriguez Torres to "always respect the human rights of our people."