Hans Riegel, who made German candy maker Haribo and its signature gummi bears a chewy hit for children — and adults — across the globe, died on Tuesday at age 90. Haribo said in a statement that Riegel died unexpectedly of heart failure in Bonn, where the company is based. 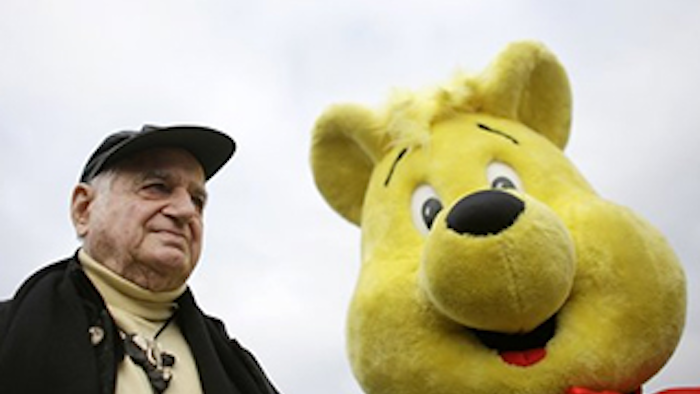 BERLIN (AP) — Hans Riegel, who made German candy maker Haribo and its signature gummi bears a chewy hit for children — and adults — across the globe, died on Tuesday. He was 90.

Haribo said in a statement that Riegel died unexpectedly of heart failure in Bonn, where it is based. He had been recovering from an operation to remove a benign brain tumor.

Riegel was the son of the company founder, also named Hans Riegel, who in 1920 set up Haribo — an acronym for "Hans Riegel Bonn." In 1922, his father invented the "dancing bear," a small bear made out of fruit gum that laid the foundations for Haribo's later success with the "gold bear."

The company founder died in 1945. Upon being released as allied prisoners after World War II, Riegel and his younger brother, Paul, set about rebuilding the family firm. Haribo had only about 30 employees immediately after the war but, as West Germany's economy took off, the number was up to 1,000 five years later.

Paul Riegel, who died in 2009, focused on production while Hans Riegel took charge of marketing and sales — for instance, promoting the company's wares with the slogan "kids and grown-ups love it so, the happy world of Haribo."

Haribo said Riegel took inspiration from children's magazines and comics, once saying: "I love children. They are my customers. I have to be informed about what they want to nibble, what they think, what language they speak."

In the 1960s and 1970s, Haribo acquired businesses in the Netherlands, France and Britain; and in 1982, it added a sales office in the United States, setting up Haribo of America, Inc. in Baltimore.

Ubiquitous in Germany, they are also available in the most far-flung and unlikely places around the world, beloved for their bright colors, sugary taste and teddy-bear shape.

"Wherever I traveled in the last few years, the gold bears had already long been there," Foreign Minister Guido Westerwelle said as he paid tribute Tuesday to Riegel's achievement in making Haribo "a German global brand."

Riegel remained a co-owner of the company and actively involved in the business until the end, his career spanning nearly seven decades.

The privately owned company now employs more than 6,000 people, about half of them in Germany, and has 15 production sites in 10 European countries.

Riegel was awarded Germany's highest honor, the Federal Cross of Merit, in 1994. That was recognition not only of his business career but of his commitment to social issues, such as encouraging the training of talented young people, and sports. Riegel was a passionate player and promoter of badminton.