With two other turkeys ticketed for a presidential pardon at the White House, their 20-pound brother met Minnesota's governor Monday at a state Capitol ceremony featuring much of the same upbeat pageantry ahead of a far gloomier fate for the bird. 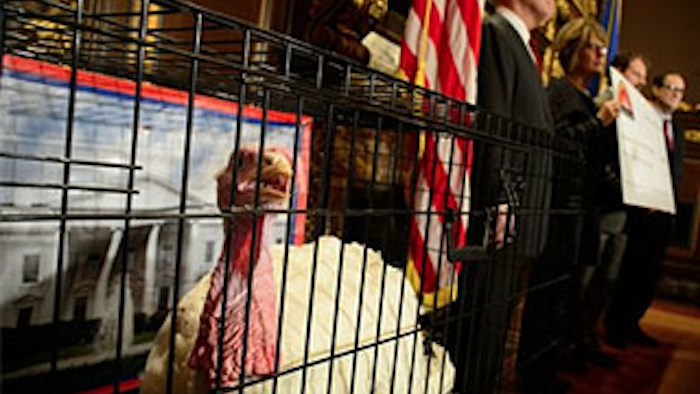 ST. PAUL, Minn. (AP) — With two other turkeys ticketed for a presidential pardon at the White House, their brother met Minnesota's governor Monday at a state Capitol ceremony featuring much of the same upbeat pageantry ahead of a far gloomier fate for the bird.

Jokingly dubbed "Delicious" by a farmer traveling with the 20-pound gobbler, the unfortunate turkey enjoyed only a brief stay of execution — not a reprieve — during a ceremony laced with gallows humor at Gov. Mark Dayton's Capitol office.

The next stop for the pink and white bird: a trip to the St. Paul Salvation Army and, eventually, dinner for the less-fortunate. Conversely, his two brothers are headed to the White House Wednesday where they'll be officially spared.

"I don't know how long you'd last in my backyard with two German shepherds," Dayton whispered as he stroked the bird's feathered back.

Because the turkey was part of the flock considered candidates for a White House pardon, he got far more TLC than the average dining room-bound bird. Along with his more fortunate siblings, he lived in a separate barn and relaxed to an eclectic music mix including Vivaldi and John Mayer.

The bird and his two White House-bound kin were all raised by turkey farmer John Burkel in Badger, Minn., near the Canadian border. As current chairman of the National Turkey Federation, Burkel was tapped to provide a bird for President Barack Obama's pardon — a yearly custom that dates to President Harry S. Truman in 1947. The second bird is sent along in case the first comes down with performance anxiety.

Besides music and privacy, Burkel conditioned the naturally nervous birds to behave in front cameras and crowds.

"You need to cultivate the ability to not get too distracted," said Steve Olson, executive director of the Minnesota Turkey Growers Association. After Obama's pardon, the star turkeys will head to Walt Disney World for a Thanksgiving Day parade.

Minnesota has about 250 independent turkey farmers, more than any other state, who combined operate 600 turkey farms. The Turkey Growers group said that in 2011, they raised nearly 50 million birds and generated $600 million for farmers, processors and related industries. Among other large processors, Minnesota is home to Willmar-based Jennie-O Turkey Store, which is owned by Hormel Foods and is the second-largest turkey producer in the world.

John Zimmerman, the farmer who dubbed the doomed bird Delicious, is president of the Minnesota Turkey Growers and a second-generation turkey man. His farm produces about 4 million pounds of turkey meat a year. He said his father started raising birds in the early 1950s, at a time when turkey farms were popping up around Minnesota. It largely had to do with easy access to the corn and soybeans that are staples of turkeys' diets.

"He grew up milking cows, and he didn't want to milk cows anymore," Zimmerman said of his father. "He got out of the Navy and said, 'I'm going to do something different.'"