This year, there was something a little different about the Napa Valley Grapegrowers' pruning competition. Some of the contestants lining up to hack and slash at the overgrown vines were women. The women's first-place winner, Celia Perez of V. Sattui Winery, had the highest scores for both men and women. 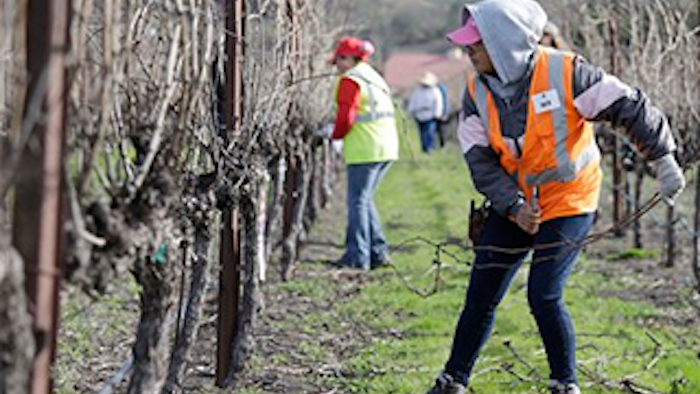 YOUNTVILLE, Calif. (AP) — Every year for the last 12 years the vineyard workers of the Napa Valley have gathered in the soft light of a mid-winter morning, shears at the ready, game faces on, each eager to prove he's the best man on the job.

But this year, there was something a little different about the Napa Valley Grapegrowers' pruning competition. Some of the contestants lining up to hack and slash at the overgrown vines were women.

"There's been this perennial conversation about, 'Do we include women in the competition?' And the answer's always been, 'Not yet,'" explained Jennifer Putnam, executive director of the group. "This year we looked around the room and just thought, 'Yes, it's time.'"

Not only did the newcomers to the event compete hard, posting excellent scores in technique and quality, organizers announced some hours after the event that the women's first-place winner, Celia Perez of V. Sattui Winery, had the highest scores for both men and women.

Talk about a dazzling debut.

The decision to open up the contest to women marks a change in what used to be the nearly exclusively man's world of vineyard work. There are a lot more women to be seen working in the fields, something that accelerated after the 2008 recession swallowed up other jobs.

Meanwhile, the idea of vineyard equality has become accepted as women have progressed, some becoming leaders of "A'' crews, the much-sought after top harvest teams. "The cultural shift has now taken place where we felt like the women would be comfortable enough coming to the competition," said Putnam.

Pruning is an important part of vine husbandry that focuses the new growth on vines and helps determine what the next harvest will look like. Different techniques are used for different grapes and climates, and skill is as important as speed. For the growers' contest, workers are first judged on technique, then winners are ranked by time and the finalists battle it out for first through fourth place.

On the line are cash, tools, clothing — and pride.

If there was any grumbling about the addition of a women's division, it wasn't showing as the contest kicked off Feb. 20 at Beringer Vineyard's Gamble Ranch.

Steel rasped on steel as competitors sharpened their shears and the murmur of voices dropped as they attacked the rows of spindly vines. There was the snick of sharp, quick cuts made close to wires supporting the vines followed by the rustle and clang of the dry wood being dragged out.

Among the 56 workers in the men's division was Jesus Juarez, who works at Moulds Family Vineyard, and who placed first in the 2008 pruning contest. (He did well this year, too, finishing in fourth place.) He and his brother Roberto, also a vineyard worker, weren't fazed by seeing the 13 women show up to compete in the women's division.

"It's good for the women because they get that opportunity," said Roberto Juarez, who like all the contestants interviewed for this story spoke through an interpreter.

Also competing was Maria Fuentes, a vineyard veteran who has worked for Beckstoffer Vineyards since 1977.

"I'm very happy to be here," said Fuentes, smiling as she declared, "It's about time."

Fuentes thought men might have the edge on strength while women might be a little quicker at skills like suckering, which is when unwanted new shoots are taken off the vine later in the growing season. "I'm not saying that just because I'm a woman," she added, laughing.

The results bore Fuentes' observations out. Overall, women scored a little higher on technique/quality; men had the edge on speed, Putnam said.

"The really exciting thing we discovered when we got back to the office was that the first-place female winner would have beaten everyone in the competition — and not by just a little!" Putnam added in an e-mail after the event.

At the time the prizes were awarded, Perez was asked the question of the day: Can women work as well as men in the vineyard?

"Yes," she said, nodding vigorously. She looked down at the prizes she was carrying and smiled. "And here's the proof!"