Paris has been a relative latecomer to the idea of fresh food with local ingredients at prices more for the masses. Chef Greg Marchand, who spent much of his professional life abroad, was unwittingly ready for the movement when he opened his restaurant, Frenchie. 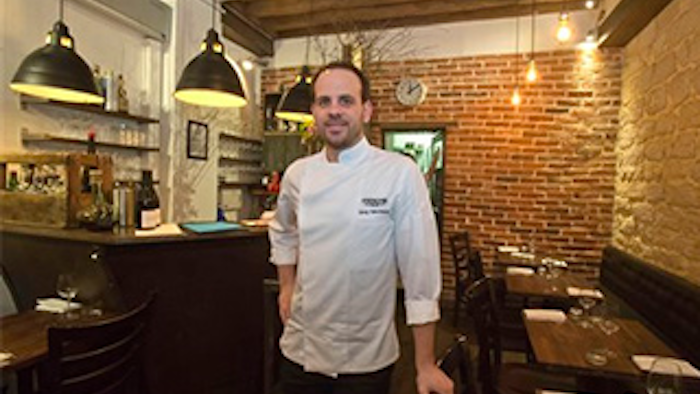 PARIS (AP) — Food nourishes the tiny Rue du Nil from the dim light of morning — when the first deliveries start going out to Paris' most sought-after restaurants — until well after midnight, when the young chef who transformed an unchic side street into a culinary destination finally closes up.

In the meantime, sides of beef age in transparent lockers, pastrami is smoked, root vegetables are fondled, and visitors from around the world poke around in the (usually vain) hope that a reservation might open up at Frenchie, the restaurant that started it all.

The first meal Greg Marchand cooked for a crowd was veal in cream sauce — and the dozen or so orphans he shared a home with ate it up. He was subbing for the orphanage cook, who took weekends off. An indifferent student, he enrolled in cooking school after his time in the orphanage ran out at age 17.

"I wasn't the best of the bunch. I had other things to sort out in my life first," he said in a recent interview. "As soon as I finished cooking school, I left France. I wasn't tied to France much."

Marchand's subsequent meandering path — hotel restaurants in London and Hong Kong, a beachside bar in Spain, Jamie Oliver's kitchen, New York's Gramercy Tavern — put him at the crest of bistronomie, the French movement combining highbrow gastronomy and the lowly corner bistro. He returned to France in 2009, just coming into his 30s and into his own as a chef.

Center of haute cuisine, Paris has been a relative latecomer to the idea of fresh food with local ingredients at prices more for the masses. Marchand, who had by then spent his professional life abroad, was unwittingly ready.

"A lot of young chefs — I'm part of it — open a restaurant with no investor, so with not much money. It's often small places, with no designer work because they cannot afford it. But what we have is a craft, knowledge, experience," he said. "It's often chefs who have been traveling a lot. We have a French base, French cuisine basis, but because of our travel we are much more open-minded on ingredients, on culture, on techniques."

For 48 euros ($65), diners get a three-course meal at Frenchie — Oliver's nickname for Marchand back when he was the only Frenchman in the British chef's kitchen. It's not cheap, but neither is it especially expensive in a city where tourists expecting the world's finest cuisine instead routinely get fleeced in brasseries charging far more for factory-produced meals that are discreetly unwrapped and thawed in the kitchen.

They'll see Marchand peeking out obsessively, serving up some plates himself and unfailingly checking in with customers and mysteriously keeping tabs on comings and goings in the wine bar he runs across the cobblestoned street. There's nothing fancy about it: the restaurant seats about 30, plates are simple white, and menus come on clipboards. Jeans and sneakers are welcome for staff and customers alike.

And, to be honest, there are not a lot of French voices on the street or inside once the sun goes down. Staff come from all over, and include a smattering of Canadians and Americans. Marchand cheerfully — and frequently — speaks English.

But a visit to Rue du Nil is still worth the trip even for those who can't snag a reservation.

"It has become one of the destinations for shopping and snacking and begging for reservations in the city, which was certainly not the case before he got there five years ago," said Meg Zimbeck, a transplanted Kansan whose website Paris By Mouth is aimed at food-loving visitors to Paris. "He wants to change the way people shop for food, experience food. Not just turn a massive profit."

And Marchand's influence is spreading. When he mentioned an opening on the street, Alexandre Drouard, a 30-year-old whose Terroir d'Avenir supplies Frenchie among dozens of the most sought-after restaurants in Paris, moved in and opened a butcher, a fish shop and a small grocery store. A coffee roaster recently went in, too. Marchand himself expanded to a wine bar (no reservations) and an American-style breakfast and lunch joint whose menu includes pastrami sandwiches, bagels and sticky buns.

"The goal was to change how people shopped with products that are a little bit different," Drouard said. "What we're offering, the raw ingredients, are for people who know a bit about cooking."

Those same aspiring chefs can also check out Marchand's techniques in his cookbook, which goes on sale in English in March. It's a radically pared down version of what's on offer in the restaurant, which puts out some truly spectacular dishes in a home-sized kitchen crammed with sous chefs, specialized equipment and ingredients only seen on Rue du Nil.

"My customers were asking, 'How do you do this? Can I do it at home?' And my answer was, 'No, you can't do this at home.' And then after a while I thought, 'Well, yes you could,'" Marchand said.

The French-language version of the book has a select group of fans in Paris, Zimbeck said.

"When I go over to the houses of friends who cook in Paris in restaurants they have the book open with post-it notes and tabs. I think they're going home and trying to figure out how to do things and incorporate some of his techniques," she said. "It might be for the home cooks who are willing to take on a weekend long project in order to have some amazing Sunday night meal."

Which is just as well, because Frenchie is closed on weekends so Marchand can go home to his children — and some cooking from his wife, who is now usually the one cooking that veal dish that launched his vocation.

"That was a decision I made as soon as I could afford to, to spend a little time with my family," he said. "Weekend is sacred. Weekend is family."