Klingon Warnog, the first Star Trek themed beer to hit the U.S., will soon be available to Klingons — and Klingon fans — throughout the country. Tin Man Brewing of Evansville, Ind., brewed the beverage in partnership with the Federation of Beer. 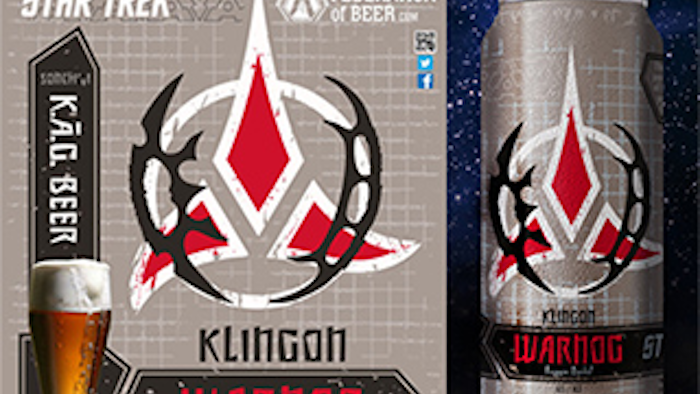 Klingon Warnog, the first Star Trek-themed beer to hit the U.S., will soon be available to Klingons — and Klingon fans — throughout the country.

Tin Man Brewing of Evansville, Ind., brewed the beverage in partnership with the Federation of Beer. The beer incorporates rye malt into a modern Dunkelweizen grain bill for a unique flavor profile. According to the Federation of Beer, Klingon Warnog’s aroma is “predominately mild banana and clove produced by the German wheat yeast, supported by subtle sweet malt character from the use of Munich malt.”

The Federation of Beer already has produced another Star Trek-themed beer — Vulcan Ale — which has only been available in Canada. But it was only logical that the company produce a beer aimed at U.S. Trekkies.

Klingon Warnog’s launch comes amid the rising popularity of beverages tied to TV shows. In addition to beer, a line of Star Trek wines is produced by Vinport. Other popular series, including Downton Abbey and Game of Thrones, also boast wine or beer products.

Klingon Warnog will hit the shelves in the U.S. and Canada later this year.