Photo of the Day: China Seeks to Export Apples to U.S.

China has its sights set on exporting its fruit to the United States. And that's OK with growers in Washington, who harvest the bulk of America's apple crop. Growers say opening U.S. borders to Chinese apples means American farmers should be able to get a foothold in the China's growing market. 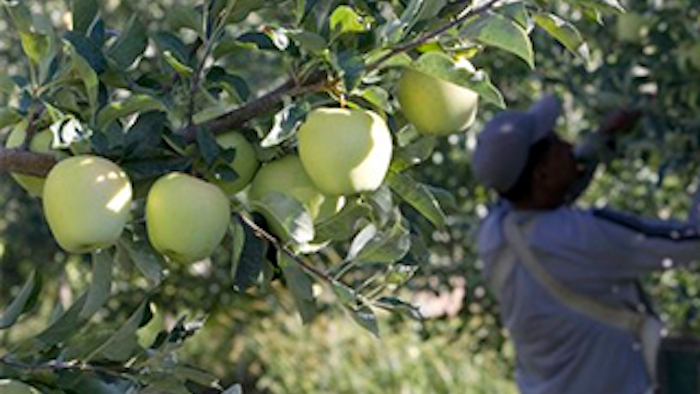 (AP) —In this Sept. 16, 2013 photo Golden Delicious apples are harvested in a Valicoff Fruit Company orchard near Wapato, Wash.

China, the world's largest apple producer, wants to export the fruit into the United States. That's OK with growers in Washington, who are trying at the same time to break back into the massive Chinese market. (AP Photo/Yakima Herald-Republic, Gordon King)

SPOKANE, Wash. (AP) — China has its sights set on exporting its fruit to the United States. And that's OK with growers in Washington, who harvest the bulk of America's apple crop.

Having the world's No. 1 apple producer as a competitor may seem counterintuitive, but growers say opening U.S. borders to Chinese apples means American farmers should in turn be able to get a foothold in the country's lucrative and growing market.

"We need to export apples," said Mark Powers, vice president of the Northwest Horticultural Council, a Yakima-based group that handles trade disputes for apple growers in Washington, Oregon and Idaho.

The Chinese consume most of their nation's apple harvest and the expanding market there is particularly attractive to growers in the Northwest who depend on foreign sales because the U.S. already produces more apples than Americans can eat.

Washington grew a record crop of 129 million bushels last year, about 30 percent of which was exported to countries such as Canada, Mexico and Taiwan. The state's $2.2 billion apple industry accounted for about 65 percent of America's apple harvest.

Northwest farmers once exported about 11,000 tons of Red Delicious and Golden Delicious apples to China annually. That deal ended a year ago, when China said it was worried that apple diseases from Washington that could damage its own orchards.

But Washington growers suspect the real reason the market closed was to put pressure on the U.S. to allow Chinese apples into this country. And they're hoping trade officials agree to a reciprocity deal soon.

For its part, China, which grows half of the world's apple crop, has been eyeing to the U.S. market for 15 years. Observers think ongoing trade talks may mean U.S. apples could return to the Chinese market by early next year. Chinese apples, meanwhile, could enter the U.S. market by next fall.

"Reopening the Chinese market to the Washington growers is a huge benefit," said Scott Marboe, director of marketing for Oneonta Starr Ranch Growers, a Wenatchee apple company. "It is a high-end user of the quality fruit we produce every year."

Still, not everyone is welcoming the possibility.

The U.S. Apple Association, a Virginia-based trade group for the nation's apple growers, worries Chinese imports could come with invasive pests that might damage American orchards.

"Under no circumstances should these pest and disease threats be allowed to enter this country and jeopardize U.S. apple production," the association said in a statement.

Diane Kurrle, the group's vice president of public affairs, said the association has been closely following this issue.

"We strongly support a strong science-based system to ensure that pest and disease issues are treated appropriately," Kurrle said, rather than a political solution that simply opens the door to Chinese apples.

"Chinese apples have been exported to more than 80 countries and regions, which proves that China has the ability to manage pest problems," said Geng Shuang, a trade expert with the Chinese embassy in Washington.

The process for allowing Chinese apples just entered the "pest risk assessment" phase where U.S. scientists consider the chances of pests entering the country in the produce and what damage that could cause, Powers said. More than 20 potential pest risks were recently identified by the USDA.

"The last thing our growers want is a new species of bug that attacks orchards coming in on Chinese fruit," Powers said.

In Washington, state agriculture officials are also awaiting a visit from a Chinese delegation, hoping that would be a final step in opening the Chinese market again to its apples. No trip has been scheduled yet.

"If it's done in the next two or three weeks, we could be shipping product in there as early as January," said Todd Fryhover, president of the Washington Apple Commission, which promotes the state's apples worldwide.

The U.S. is the world's third-largest apple grower behind the European Union. It also imports apples from Chile, Argentina and South Africa. The addition of Chinese apples could mean more competition for American farmers.

"More competition is never a good thing," Fryhover said. "But there is always going to be competition. We can compete with anybody."