M&M's will feature its yellow peanut M&M "spokescandy" in its 2014 Super Bowl ad. Mars has released a pre-Super Bowl teaser ad online that shows the character dancing in a headband, then being shot by a tranquilizer dart and dragged off camera. 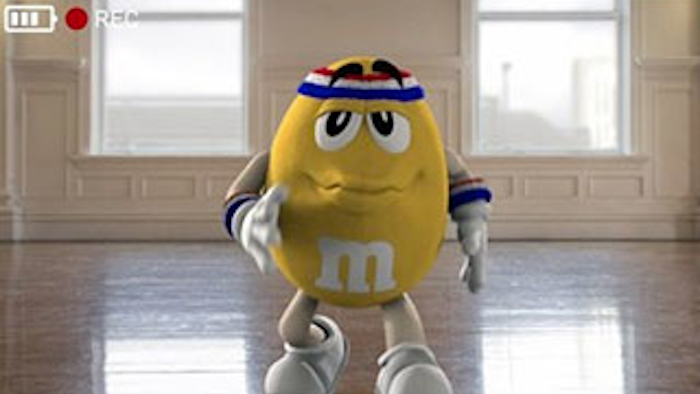 NEW YORK (AP) — Is Yellow ready for its close-up?

M&M's will feature its yellow peanut M&M "spokescandy" in its Super Bowl ad this year. The Mars Inc. brand has released a pre-Super Bowl teaser ad online that shows the character dancing in a headband before being shot by a tranquilizer dart and dragged off camera.

"Find out what happens to Yellow," a hand-written card reads.

The teaser is part of a Super Bowl ad trend: More content is being released ahead of time online in the hope that it goes viral. Advertisers are seeking to drum up excitement for their spots running during the big game, when more than 108 million people are expected to watching Feb. 2.

They're also hoping to get more bang for their buck: A 30-second Super Bowl ad costs about $4 million.

M&M's says the online teaser ad is a first for the company.

"We see it as a very effective way to drive anticipation and allude to what the spot will be without revealing surprises," said Seth Klugherz, M&M's marketing director. The company also plans pseudo-media interviews with the Yellow character before the big game.

The Yellow spokescandy was introduced along with the other multicolored mascots in 1954. Its current incarnation is voiced by actor J.K. Simmons, who has had roles in movies including "Juno" and "Spider-Man." In the past, yellow has played a sidekick to the Red spokescandy, so this year is a bit of a star turn.

The use of online teasers is growing. Google Inc.'s YouTube, which collects Super Bowl teasers and ads on its Ad Blitz site, said last year about 10 advertisers uploaded teasers. This year, more than 12 have. Meanwhile, searches for "Super Bowl commercials" have doubled compared with the same time last year, suggesting people are increasingly expecting to watch Super Bowl content well before the game's kickoff.

With the ad, M&M's is launching a yearlong campaign focusing on the quality of the peanuts in M&M's. "Only one in 100 peanuts is lucky enough to become an M&M's peanut," copy reads at the end of the teaser.

The focus on quality comes as more and more Americans seek out healthy snacks. Usually a venue for junk food like Doritos and soda, this year healthier foods like Danon Oikos Greek yogurt, Chobani Greek yogurt, Wonderful Pistachios and Cheerios are all slotted as Super Bowl advertisers.

The M&M ad will run during the first half of this year's Super Bowl, which will be broadcast on Fox.