Photo of the Day: Deep Freeze May Benefit Agriculture

It may be hard to think of this week's deep freeze as anything but miserable, but there are silver linings. Although cold weather is generally no friend to crops, some of southern Florida's citrus fruits can use a perfectly timed cool-down, which they were getting as midweek temperatures hovered around freezing. 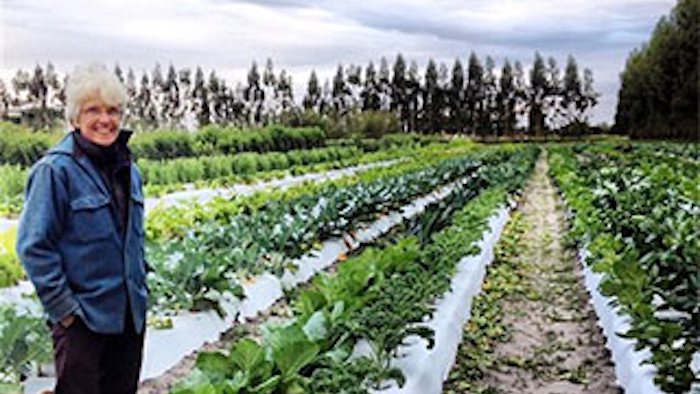 In this Jan. 7, 2014 image from video Diane Cordeau poses for a photos on her Kai-Kai farm near Indiantown, Fla.

Cordeau picked her squash and tomatoes on Monday to beat the freeze. But she says her leafy vegetables, such as kale, will be sweeter and taste better because of the cold. (AP Photo/Suzette LaBoy)

It may be hard to think of this week's deep freeze as anything but miserable, but to scientists like Lenters there are silver linings: The extreme cold may help raise low water in the Great Lakes, protect shorelines and wetlands from erosion, kill insect pests and slow the migration of invasive species.

"All around, it's a positive thing," Lenters, a specialist in the climate of lakes and watersheds, said Wednesday.

Ice cover on the Great Lakes has been shrinking for decades, but this year more than 60 percent of the surface is expected to freeze over at some point — an occurrence that could help the lakes rebound from a prolonged slump in water levels.

Even agriculture can benefit. Although cold weather is generally no friend to crops, some of southern Florida's citrus fruits can use a perfectly timed cool-down, which they were getting as midweek temperatures hovered around freezing.

"A good cold snap lowers the acidity in oranges and increases sugar content, sweetens the fruit," said Frankie Hall, policy director for the Florida Farm Bureau Federation. "It's almost been a blessing."

Scientists noted that subzero temperatures and pounding snowfalls like those that gripped much of the nation for several days are not unheard-of in the Midwest and Northeast and used to happen more frequently.

For all the misery it inflicted, the polar vortex that created the painfully frigid conditions apparently broke no all-time records in any major U.S. cities, according to Jeff Masters, meteorology director of Weather Underground.

"I'm just happy to see that we have a normal winter for once," said Lenters, who works for Limnotech, an environmental consulting firm in Ann Arbor.

As the climate has warmed, the absence of bitter cold has actually been damaging.

The emerald ash borer, an insect native to Asia, arrived in the U.S. around 2002 and has killed about 50 million ash trees in the Upper Midwest. But some locales this winter may have gotten cold enough to kill at least some larvae, said Robert Venette, a U.S. Forest Service research biologist in St. Paul, Minn.

A reading of minus 20 will usually produce a 50 percent mortality rate, and "the numbers go up quickly as it gets colder than that," Venette said.

While the freeze won't wipe out the ash borer, it will give communities a chance to develop plans for limiting the bug's spread, he said.

Other pests that originated in warmer places could be affected as well, including the gypsy moth, the hemlock woolly adelgid and the European beetle that carries Dutch elm disease, said Lee Frelich, director of the University of Minnesota Center for Forest Ecology. Native insects have evolved to cope with deep freezes.

Extreme cold also reins in invasive nuisance plants such as kudzu, which has ravaged the Southeast but has yet to find its way north, said Luke Nave, a University of Michigan assistant research scientist.

"As long as these cold snaps continue to occur, they will help reinforce the current range limits for certain plants," Nave said.

Water levels have been below normal in most of the Great Lakes since the late 1990s because of high evaporation and occasional lack of rain and snow. A year ago, Lakes Michigan and Huron hit their lowest points on record. Cargo ships were forced to carry lighter loads to avoid running aground in shallow channels. Marinas lost business and wetlands dried up.

But levels rose sharply in 2013, thanks to heavy snow and rain. Extensive ice cover this winter could help the lakes continue their recovery. The National Oceanic and Atmospheric Administration's Great Lakes Environmental Research Laboratory in Ann Arbor predicts ice will cover 57 to 62 percent of the surface waters.

One of the lab's climatologists, Jia Wang, previously reported that the lakes' ice cover has declined 71 percent over the past 40 years. He said this year's showing may be a short-lived exception to an ongoing trend.

The deep freeze also has piled up ice along Great Lakes shorelines, providing a buffer that will prevent heavy waves from eroding soil and disturbing wetlands.

Sections of the lakes that freeze solidly create new pathways for wandering wildlife. That could help gray wolves, which have spread across Michigan's Upper Peninsula, find new territory in the Lower Peninsula, where the occasional straggler has turned up but no established packs are known to exist.

"You can decide for yourself whether that's a good thing," said Philip Myers, curator of mammals at the University of Michigan Museum of Zoology. "I think it is."