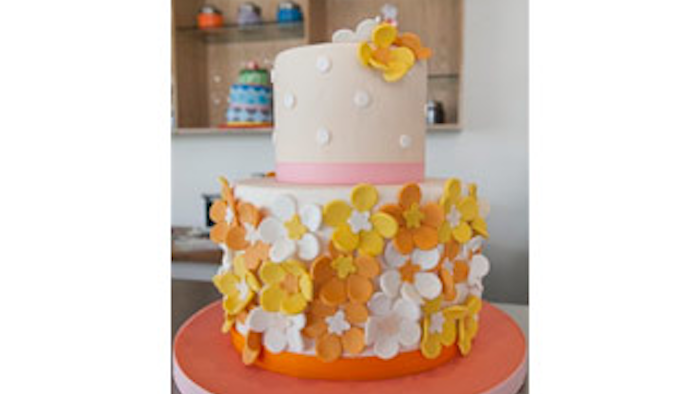 You can build a bear, bottle your own wine, paint pottery — and now, decorate your own television-worthy cake.

"With the pottery places you've got this plate sitting around for a while," he says. "With this, you make a cake, you take it home, you invite a bunch of friends and you eat it."

Aspiring cake decorators can do as much or as little as they like, Goldman says. After selecting a pre-made cake or cupcakes — in chocolate, vanilla, marble, carrot, red velvet and a daily special — customers can cover it in fondant or buttercream or have one of the store's employees do it. Decorations will include everything from sprinkles, sugar flowers and jellybeans to Goldman's signature cake tattoos. Customers will get a tray of paintbrushes, piping tips, fondant tools and other gadgets. At a glass-enclosed airbrush station, customers can learn to graffiti their cakes.

"I want people to not only have fun, but to learn something, to see they can do something amazing and fun and creative and be successful at it," Goldman says. "At the end of their two hours I want them to look at their cake and run up to a random stranger and say 'Dude, look what I made!'"

In a twist, Goldman will have some competition from TV's "Cake Boss" Buddy Valastro, who is introducing a new line of cakes at bakeries and grocery stores this summer. Unlike Goldman's line, Valastro's cakes will arrive fully decorated, including the "Badda Bloom" — a two-layer cake, one chocolate and one vanilla, with a layer of fudge and covered in bright green frosting with pink and purple flowers.

Goldman says his plans include roughly two dozen stores nationwide within the first two years, and later, a store in Tokyo.

The first, in Los Angeles, will have 10 tables with 40 seats in the decorating area. Goldman says he expects a large part of the clientele to be children and teenagers as well as bridal showers and bachelorette parties. A small cafe will offer — what else? — cake and coffee for parents sitting out the mayhem.

"This is something that's different and fun and cool," Goldman says. "For the cost of movie tickets and popcorn and a soda you can hang out and do a cake with your kids."

Prices will start at $36 for a cake and all the decorating accessories, or $18 for four cupcakes. In addition, Duff's Cakemix will also offer fully decorated cakes for purchase, Goldman says, and to-go kits that contain everything a person needs to decorate at home.

Among Goldman's partners is Los Angeles restaurateur Richard Drapkin. The store will also have a Duff's Cakemix food truck that caters parties.

Goldman is also developing a line of branded products that could include unique cake tattoos, he says.