It's a smorgasbord on Arkansas highways, with the third food spill in as many weeks. 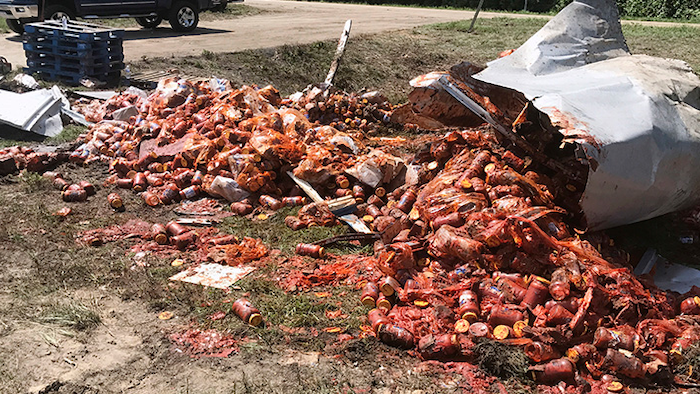 In this Monday, Aug. 21, 2017, photo provided by the Camden News, broken jars of spaghetti sauce litter a road near Camden, Ark. The crash marked the third time this month that edible goods were left on an Arkansas highway. A tanker spilled bourbon on Interstate 40 in eastern Arkansas on Aug. 2, and on Aug. 9 a truck split open on Interstate 30 in Little Rock, spilling frozen pizza. (Shantelle Laughlin/Camden News via AP)

CAMDEN, Ark. (AP) — It's a smorgasbord on Arkansas highways, with the third food spill in as many weeks.

A truck driver distracted by a GPS unit crashed near the intersection of U.S. 278 and Arkansas 24 at Camden early Monday and spilled a truckload of spaghetti sauce. On Aug. 2, a tank car filled with bourbon crashed on Interstate 40 in eastern Arkansas and motorists on Interstate 30 had to leave the highway at Little Rock on Aug. 9 after a truck accident left frozen pizzas scattered about.

Camden police Sgt. Cory Sanders said the spaghetti sauce truck was headed to Dallas about 3 a.m. when its driver became distracted, then overcorrected and rolled over after crossing the center line of the highway. Sanders said the driver suffered minor injuries.