LAUGAR, Iceland (AP) — In a remote valley near the Arctic Circle where the wind whips the coarse yellow grass, China and Iceland are preparing to look to the sky — and a shared future. Construction workers are building a research facility to study the Northern Lights, whose spectacular streaks of... 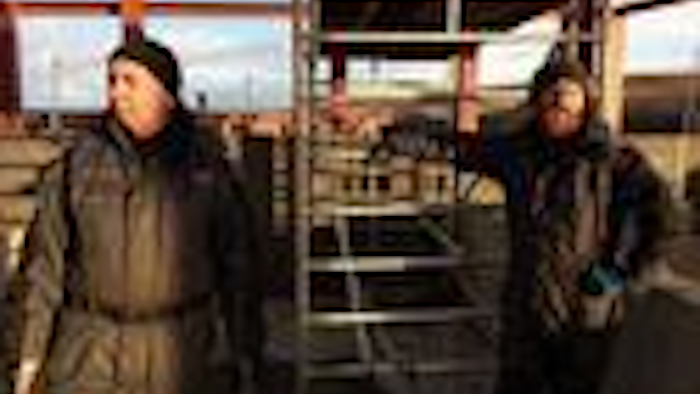 LAUGAR, Iceland (AP) — In a remote valley near the Arctic Circle where the wind whips the coarse yellow grass, China and Iceland are preparing to look to the sky — and a shared future.

Construction workers are building a research facility to study the Northern Lights, whose spectacular streaks of color light up Iceland's winter skies. Funded by China's Polar Research Institute, the facility will house Chinese, Icelandic and international scientists when it opens next year.

This cement shell is a concrete achievement in the burgeoning relationship between the rising Asian superpower, population 1.37 billion, and this tiny North Atlantic island nation of 330,000 people. It may seem a lopsided friendship, but both countries perceive benefits. Beijing wants an Arctic ally as climate change opens up new sea routes and resource-extraction opportunities, while Iceland seeks heavyweight friends to anchor it against stormy economic waves.

"It is better to be a friend to everyone when you are small than be an enemy to anybody," said Reinhard Reynisson, director of the nonprofit company building the Aurora Observatory.

Reynisson speaks with the confidence of a country that has weathered earthquakes, volcanoes, famine and financial meltdown since it was settled by Vikings in the 9th century. But China's growing interest has also aroused suspicions among some Icelanders, who are wary of big powers trying to grab their resources, whether fish, energy or land.

"We are a very small country, we are only 300,000 people, so we don't look at our independence as an automatic thing," said Asgeir Jonsson, an economist at the University of Iceland. "It's something that you have to protect and look after.

"In our history, we have a long story of fighting with the bigger powers around us over fish and the resources that we have. That has left its mark on the population."

Iceland was nudged in China's direction by financial calamity. When the global credit crunch hit in 2008, Iceland's banks — whose debts had ballooned to more than 10 times the country's GDP — collapsed. Iceland's currency nosedived, unemployment soared, and Iceland was forced to go the International Monetary Fund and the European Union for bailouts. It also began looking for new economic partners to help it rebuild — and China was willing.

In 2010, the two countries agreed currency swaps between Iceland's krona and China's yuan, and in 2013 they signed a free trade agreement — the first between China and a European country.

With Iceland's support, China was granted observer status in 2013 at the Arctic Council, whose core members are Canada, Denmark, Finland, Sweden, Norway, Russia, the United States and Iceland.

It also attends annual Arctic Circle Assemblies hosted by Iceland — gatherings of politicians, officials, scientists and businesspeople to discuss the future of the region.

"China's got a broad range of Arctic interests — economic, scientific, political, strategic," said Anne-Marie Brady, editor in chief of the Polar Journal and a global fellow at the Wilson Center in Washington. "But the main thing it wants at the moment would be to make sure it has a seat at any decision-making table and has access to any rights that are up for grabs. So it's great to have a friendly state like Iceland."

Some of the plans discussed by the two countries have been grandly ambitious, such as making a deep-sea port in a northern Iceland fjord to create a major shipping hub on the Northern Sea Route.

It remains unbuilt, but the economic relationship between the two countries is growing steadily.

Iceland has granted the China National Offshore Oil Company permission to explore in Iceland's waters, and Beijing has tapped Icelandic expertise in geothermal power, a major industry in volcanic Iceland and a potential source of clean energy for China.

The Chinese Embassy in Reykjavik says bilateral trade, "though still small in terms of volume, is growing rapidly." In the first nine months of 2016, Iceland's imports from China were worth $330 million and its exports $77 million, a year-on-year increase of 12.6 percent.

In an email to The Associated Press, the embassy said China could benefit from Iceland's "cutting-edge technologies in renewable energy, life-science (and) carbon-fiber industries," as well as its fresh fish, meat, dairy products and mineral water. In return, China can provide Iceland with a wide range of Chinese-made goods.

Chinese tourists — whose numbers rose from 26,000 in 2014 to an estimated 60,000 this year— are helping to drive a tourism boom that has been the savior of Iceland's economy since the financial crisis.

Cozying up to Beijing also gets tiny Iceland noticed by much larger nations. Brady notes that Iceland's politicians have become adept at "playing the big powers off each other."

"They are getting a lot more attention from the United States in recent years because of their perceived very good relationship with China," she said. "And yet what the ordinary people think about that is often quite different from their government. ... the population has some misgivings about this close relationship."

Those misgivings reached a peak five years ago, when multimillionaire Chinese businessman Huang Nubo tried to buy a 300 square kilometer (120 square mile) chunk of remote northeast Iceland to build an eco-resort. Strong public opposition led the Icelandic government to block the purchase in 2011 — in part because no foreign buyer had ever bought so much land.

Suspicion lingered when the Aurora Observatory was announced for a sparsely populated region 250 miles (400 kilometers) northeast of Iceland's capital, Reykjavik. Pascal Heyman, a former official at the Organization for Security and Cooperation in Europe, said in 2014 that the Chinese might want to use the equipment to keep an eye on NATO airspace.

Iceland is one of the best places in the world to observe the aurora borealis, or northern lights. The colorful phenomenon is caused when a magnetic solar wind slams into the Earth's magnetic field.

Scientists hope the observatory will help them learn about the interaction between the sun and the Earth's magnetic field, which could help predict space weather.

The observatory is behind schedule — in part due to a shortage of building contractors in booming Iceland — but is due to open next fall. It will include a visitors' center, and local people have begun to capitalize on the upcoming economic opportunities, opening Aurora guesthouses and thermal baths.

"Now you might hear someone say, 'They will never finish it' — not that they are spying on us or doing something totally different from what is said to be done," he said. "Why build a station here in the valley to spy on us? Much easier to rearrange some of their satellites to spy on us."