WASHINGTON (AP) — He felt it in the breeze. Nearing the end of his long, improbable journey to victory in the presidential race, Donald Trump, the candidate of so much tumult and bluster, waxed nostalgic about how he got there. "I had great parents, great parents," Trump told the crowd at a... 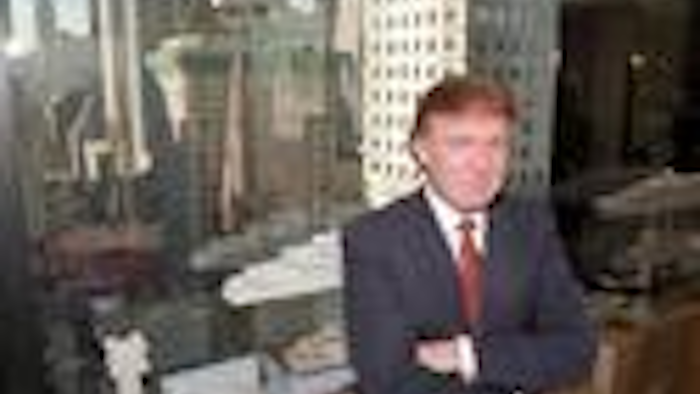 WASHINGTON (AP) — He felt it in the breeze.

Nearing the end of his long, improbable journey to victory in the presidential race, Donald Trump, the candidate of so much tumult and bluster, waxed nostalgic about how he got there.

"I had great parents, great parents," Trump told the crowd at a rally in steamy Orlando, Florida. "I just felt that nice breeze, so they're helping us out."

The candidate who for more than a year had unapologetically demonstrated he would say anything sensed it was time to rein it in.

"Stay on point, Donald, stay on point," he publicly admonished himself just days before the election. "No sidetracks, Donald. Nice and easy."

It was a rare glimpse of internal dialogue in the man whose whole life has been one long battle to prove himself bigger, louder, richer, smarter, brassier than the next guy.

Trump's unbounded confidence — and obsession with winning — have been a lifelong constant, evident in ways large and small.

Growing up as one of five children in a well-to-do Queens real estate family, Donald was the brash one, a fighter from the start.

"We gotta calm him down," his father would say, as Trump recalls it. "Son, take the lumps out."

For good or ill, it's advice Trump rarely embraced.

Trump followed his father into real estate but chafed within the confines of Fred Trump's realm in New York's outer boroughs.

He crossed the East River to Manhattan and never looked back.

"He's gone way beyond me, absolutely," an admiring Fred marveled. His son had hit it big well before he hit 40.

So successful at such a young age, Trump never did have to smooth out those lumps his father had warned about.

"He was at the top of his own pyramid," says Stanley Renshon, a political psychologist at the City University of New York who is writing a book about Trump. "Nobody was going to say, 'Donald, tone it down.'"

Trump admitted as much in a 2005 "Access Hollywood" hot-mic video when he talked about making predatory moves on women and declared, "When you're a star, they let you do it. You can do anything."

"I have the best words," he declared at a December campaign rally. "But there's no better word than 'stupid,' right?"

With no one to shush or second-guess him, Trump made brashness his way, along with his trademark glitz and flash. (Flash, in Trump's lexicon, registers a level below glitz.)

Through years of boom, bust and more than a decade of reality-TV celebrity on "The Apprentice," the deals kept coming and the price tags (and, often, the debt) kept growing — as did the hype. Always the hype.

Trump, visiting Scotland in 2012 to fight the government's proposed wind farm off the shore of his new golf resort there, was asked during a parliamentary inquiry to provide evidence for his claim that the "monstrous turbines" would hurt tourism.

"I am the evidence," Trump answered in all seriousness, drawing laughter from the galleries. "I am a world-class expert in tourism."

He's not all chutzpah, though.

Ivanka Trump tells of her "incredibly empathetic" father reaching out to help strangers he sees mentioned in the news whose stories of adversity touch him.

A Mississippi man remembers Trump picking up the phone to call when the man's father wrote to ask for a loan to build a hotel back in 1988. Trump didn't offer a loan to the Indian-American small businessman but did give him a pep talk and some advice.

"Trump inspired my father to the fullest when he told him that Dad's immigrant story was wonderful," Suresh Chawla wrote in a 2015 letter to The Clarksdale (Mississippi) Press Register.

For all the protesters who roil his rallies, Trump himself has been the heckler of our time. No one is immune. Not senator and war hero John McCain, not the disabled, not Mexicans, not Muslims, not even those people who make up a majority of the country (and the electorate): women.

Vanquished rivals learned to their peril that to criticize Trump was to set off the nuclear option in response.

Trump calls it having a little fun.

Aubrey Immelman, a political psychologist at Saint John's University in Minnesota who has developed a personality index to assess presidential candidates, puts Trump's level of narcissism in the "exploitative" range, surpassing any presidential nominee's score in the past two decades.

"His personality is his best friend, but it's also his worst enemy," says Immelman.

Still, the loudmouth from Queens has a vulnerable side. He revealed it in a movie review, of all things, with filmmaker Errol Morris in 2002.

Talking about "Citizen Kane," his favorite movie, Trump spoke with unusual introspection about the accumulation of wealth.

"You learn in Kane that maybe wealth isn't everything, because he had the wealth but he didn't have the happiness," said Trump, who once wanted to become a filmmaker himself.

"In real life, I believe that wealth does in fact isolate you from other people," he said. "It's a protective mechanism — you have your guard up much more so than you would if you didn't have wealth."

There's a wariness to the say-anything Trump that was long in the making.

Trump, in a 1990 Playboy interview, said the loss of his older brother Fred Jr., an alcoholic who died at 42, "affected everything."

"He was the first Trump boy out there, and I subconsciously watched his moves," Trump said. "I saw people really taking advantage of Fred, and the lesson I learned was always to keep up my guard 100 percent." He said he's a "very untrusting guy."

The man who has married three times lives large and offers the opulence of his real estate developments as a metaphor for what he can do for America. But in fact he has relatively simple tastes, if you are to believe him and his family.

He's never had a drink, smoked or done drugs, he says. He's a self-proclaimed "germ freak" who'd really rather not shake your hand.

Give him spaghetti and meatballs over pate any day, his sister says.

Or even meatloaf, a Trump favorite when he's at his Mar-a-Lago resort in Palm Beach, Florida.

In the end, Trump stood before voters and offered himself as the unadorned solution to what ails a nation he paints in dark, troubled hues, mocking the gimmicks and celebrity endorsements of his opponent.

"I am here all by myself," he told a crowd in Pennsylvania. "Just me. No guitar, no piano, no nothing."