DUBAI, United Arab Emirates (AP) — The pilot in last month's Emirates airliner crash landing in Dubai tried to take off again after a brief touchdown and had already begun raising the landing gear when the plane ultimately hit the ground, according to preliminary findings released on Tuesday. The... 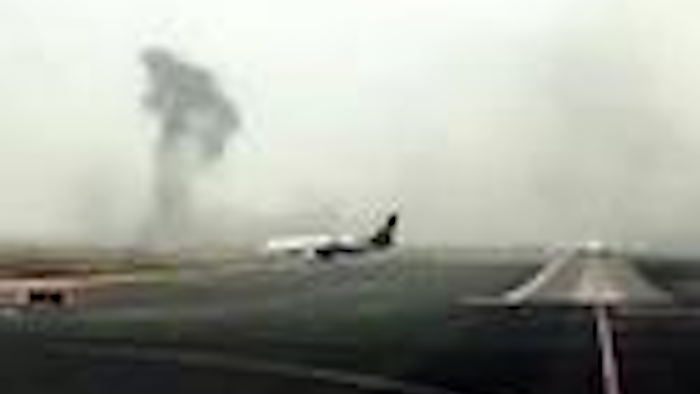 DUBAI, United Arab Emirates (AP) — The pilot in last month's Emirates airliner crash landing in Dubai tried to take off again after a brief touchdown and had already begun raising the landing gear when the plane ultimately hit the ground, according to preliminary findings released on Tuesday.

The accident destroyed the Boeing 777-300 but claimed no lives among the 300 passengers and crew, who scrambled out of the burning plane down just five usable emergency slides. One firefighter was killed in the struggle to contain the blaze.

It was the most serious accident in Emirates' more than three decades of operations, and the second major air disaster for a Dubai government-backed airline in less than five months.

The findings released Tuesday in the 28-page report by the United Arab Emirates' General Civil Aviation Authority were broadly in line with an Associated Press analysis a day after the crash into Flight EK521.

The report does not ascribe blame or attempt to determine precisely why the plane failed to successfully go around for another landing attempt on its return from Thiruvananthapuram, India.

However, it does suggest that the pilots did not manually throttle the engines beyond idle until 12 seconds after lifting back off — just three seconds before the plane struck the ground.

John Gadzinski, an airline captain and aviation safety consultant, described that as the report's most puzzling finding.

"Why did the pilot think he was going to get full power from the engines operating them the way he did?" he asked. "Was it training, procedures, company policy, automation logic or simply skill?"

As the plane came in for its initial landing, the crew received a warning indicating wind shear, a sudden change in wind speed or direction, investigators found. Two other planes had already aborted their landings less than 10 minutes before the accident, though two others landed normally.

As the Emirates plane neared the ground, a headwind started to shift to a tailwind and then back again.

The right landing gear touched the ground first about 1,100 meters (3,600 feet) from the start of the runway. It would be three more seconds until the left gear followed, according to the report. The nose gear stayed in the air.

A warning system alerted the crew of a "long landing," indicating that the plane had touched down farther down the runway than it should, and the plane took to the air again as the crew tried to make a second landing attempt.

Six seconds into the air, the crew began to retract the landing gear.

After making it only about 85 feet off the ground, the twin-engine plane began to lose altitude.

Three seconds before impact, the crew tried to push the jet engines all the way from idle speed to full power.

It was too late.

With the landing gear still retracting, the back of the plane and then the engines hit the runway at 125 knots (144 mile per hour).

A fuel-fed fire broke out as the right engine ripped off and the plane skidded on its belly before coming to a rest. About nine minutes later, a fuel tank in the center of the plane exploded, killing firefighter Jassim al-Balooshi. The fire spread into the airplane cabin.

Crew members have been praised for getting all those onboard evacuated safely. A total of 24 people were injured in the accident, according to the report. They included a cabin crew member hospitalized for five days because of smoke inhalation.

Investigators found that only half of the plane's 10 emergency slides were used after the crash. One of the slides came loose from the plane before it could be used and another was never opened because of smoke outside. Strong wind left two other slides unusable, while crew quickly shut a fifth door because of fire.

The pilot and a senior cabin crew member were the last to abandon the burning plane after the fuel tank exploded. They were forced to jump onto a slide lying on the ground after failing to find evacuation ropes as thick smoke filled the cabin.

The 777 is one of the workhorses of Emirates' fleet. The airline operates more than 120 of the twin-engine planes, more than any other carrier.

The airline welcomed the report's release and said it will review it carefully.

"Emirates is also conducting its own rigorous internal investigation to proactively review what we know about the accident, and consider measures that may enhance our operations or procedures," the carrier said.

The Emirates accident occurred just months after a plane operated by another Dubai government-owned airline, discount carrier FlyDubai, plunged into the ground in Rostov-on-Don, Russia. All 62 people aboard the 737-800 jetliner were killed.