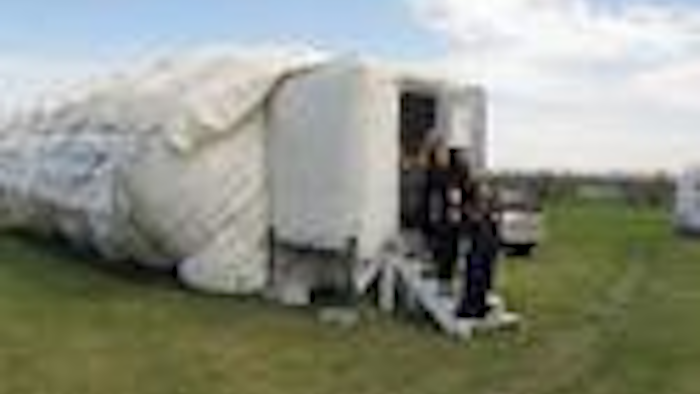 They spent 10 days performing several experiments relating primarily to how the isolation of space missions affects cohesion of the crew.

They also managed to add some entertainment to the science. They shot two music videos, to "Hands To Myself" by Selena Gomez, and "Space Oddity" by David Bowie. They made tacos to celebrate Cinco de Mayo. They baked a cake that included in frosting the names of family members and friends who had birthdays while they were on Mars.

"And we danced a lot," Zimmerman said.

It was the third mission aboard the school's inflatable habitat and the first with an all-woman crew. The inaugural study in 2014 also lasted 10 days. That was followed in 2015 by an experiment that went for 30 days.

Zimmerman, 26, Newton, 25, and Josan, 23, say they could have made 30 days without any major issues. Although two of them were already good friends, they had a successful trial run during one week together at a meeting in Alabama.

"So we knew we wouldn't kill each other," Newton said, laughing.

In both of the previous studies, the students left the habitat on occasion to test an electrical rover and space suits. The three women didn't see sunlight. They did interact with Sophie Orr, the mission controller, and participated in Skype sessions with elementary school students whose favorite question was whether the trio believed in aliens.

Each of them had unique roles on the mission. Newton, from Weeki Wachee, Florida, studied how personality and humor affect stress in confinement. Josan, from Amritsar, India, researched how isolation and lack of sunlight affect mood and sleep patterns. Zimmerman, of San Bernadino, California, and Stevens Point, Wisconsin, tested the growth of plants in space.

While much of the data will be analyzed later, the women said it will certainly show marked disruptions in sleep patterns.

"During the first few days we were on our normal schedules, but toward the end of the mission we kind of started going to bed at 4 or even 5 a.m.," Josan said.

The environment was mostly comfortable, they said, except for the next-to-last day when temperatures climbed into an unseasonable 92 degrees. Newton hopped into the freezer to cool off. Later that night, they took the mattresses off their beds and dragged them into an open area were they all slept on the floor.

"I don't know if we are allowed to do that, but it was nice," Newton said. "It was a sleepover."

Their first order of business back in the real world? Heading out for Thai food.