WASHINGTON (AP) — Shoppers raided grocery and hardware stores, bishops excused Catholics from Sunday Mass and the nation's capital was shutting down Friday, just ahead of a gnarly blizzard that will blanket much of the Eastern United States this weekend. Conditions quickly became treacherous as... 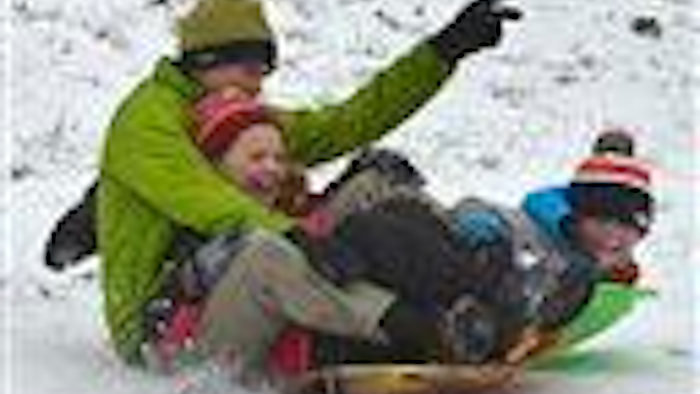 WASHINGTON (AP) — Shoppers raided grocery and hardware stores, bishops excused Catholics from Sunday Mass and the nation's capital was shutting down Friday, just ahead of a gnarly blizzard that will blanket much of the Eastern United States this weekend.

The good news, of a sort: Meterologists appear to have gotten this storm right, as predictions have converged, making it highly probable at this point that the worst of the blizzards will be focused on the Washington area. The National Weather Service said Friday that this could be one of the top three storms in the capital's history.

Snowfall as heavy as 1 to 3 inches an hour could last for 24 hours or more in some areas, said meteorologist Paul Kocin with the National Weather Service. That puts estimates at more than 2 feet for Washington, up to 18 inches for Philadelphia and 10 inches or more in New York City. Even in Atlanta, people headed home early to avoid some light snow.

All the ingredients have come together to create a blizzard with brutally high winds, dangerous inland flooding, white-out conditions and even the possibility of thunder snow, with Washington squarely in the bulls-eye, forecasters said. The winds initially picked up warm water from the Gulf of Mexico, then gained much more moisture from the warmer-than-usual Gulf Stream off the East Coast.

Kocin said it recalls "Snowmageddon," the first of two storms that "wiped out" Washington in 2010 and dumped up to 30 inches of snow in places. This storm could have similar snowfall, but the weekend timing and days of warning could help limit deaths and damage. Also, there don't appear to be more storms lined up behind this one.

Washington Mayor Muriel Bowser asked residents to "hunker down" and "shelter in place" until the storm has passed, probably sometime Sunday. The snow was expected to start falling on the capital between 1 p.m. and 3 p.m., a little earlier than previously forecast.

"The forecast does not show any evidence of lightening up," she said, stressing the "life and death implications."

People awoke to snow and ice Friday as the storm moved eastward.

At sunrise in Memphis, Tennessee, nurse Danielle Aldridge couldn't find her ice scraper, so she used a plastic kitchen cutting board to clear her windshield. She had to get to work at a family practice clinic that was open on Friday, unlike government offices and many other private businesses.

"Sick people will come in today," she said. "That's part of the deal. Like the post office — rain or shine or sleet or snow, I will take care of my patients."

In the mountains of Craigsville, West Virginia, people bought the usual kerosene heaters, propane tanks and gas cans, but also a special item: a rake that helps homeowners get snow off their roofs.

"It's going to be bad, probably," said Missy Keaton, cashier and office secretary at the town's hardware store, called Hardware, That's Us. But she said many people are prepared after snow from Superstorm Sandy caused numerous roof collapses — at stores, homes and a hardware plant — in nearby Summersville in 2012.

At a supermarket in Baltimore, Sharon Brewington stocked her cart with ready-to-eat snacks, bread, milk and cold cuts. In 2010, she and her daughter were stuck at home with nothing but noodles and water.

"I'm not going to make that mistake again," she said.

As food and supplies vanished from store shelves, five states and the District of Columbia declared states of emergency ahead of the slow-moving system. Schools and government offices closed pre-emptively. Thousands of flights were canceled. College basketball games and concerts were postponed.

The snowfall could easily cause more than $1 billion in damage and paralyze the Eastern third of the nation, weather service director Louis Uccellini said.

"It does have the potential to be an extremely dangerous storm that can affect more than 50 million people," Uccellini said at the Weather Prediction Center in College Park, Maryland.

The federal government was closing its offices at noon Friday, and the capital's subway system was shutting down from late Friday through Sunday. Many people in the region stayed home from work, and ridership on the rails was down by half, Metro spokesman Dan Stessel said.

In Washington, Baltimore, and Delaware, archdioceses reminded people that dangerous travel conditions are a legitimate excuse to avoid showing up for Sunday Mass, and watch a ceremony on television instead.

New York City, along with Long Island, Connecticut and Rhode Island, are forecast to be just inside the storm's sharp northern edge. Boston will probably get off easy this time, forecasters said.

Uccellini said it won't be quite as bad as Superstorm Sandy, but people should expect high winds, a storm surge and inland flooding from Delaware to New York.

Train service could be disrupted by frozen switches, the loss of third-rail electric power or trees falling on wires. About 1,000 track workers will be deployed to keep New York's subway system moving, and 79 trains will have "scraper shoes" to reduce icing on rails, the Metropolitan Transit Authority said.

All major airlines have issued waivers for the weekend, allowing passengers to rebook onto earlier or later flights to avoid the storms. More than 2,400 flights were canceled in the U.S. Friday, and another 2,400 Saturday, according to the flight tracking service FlightAware. The bulk of Friday's cancellations were in Charlotte and Raleigh, North Carolina; Saturday's cancelations center on Philadelphia, Washington, and — to a lesser extent — New York. By Sunday afternoon, airlines hope to be back to full schedule to handle business travelers heading out for the week.

One major event in Washington was still on: the March for Life, an annual anti-abortion rally that's usually one of the largest events on the National Mall. It will be held Friday, the anniversary of the Supreme Court's Roe v. Wade decision.

The U.S. Capitol Police said sledding on Capitol Hill — which only recently became legal after an act of Congress — would be welcome for the first time in decades, as long as conditions are safe.

While some people and businesses worried about the snow, at least one industry could see a potential boon: ski resorts. Many got a late start on the season because of record high temperatures in December.

"There is never too much snow on the slopes," said Joe Stevens, spokesman for the West Virginia Ski Areas Association.