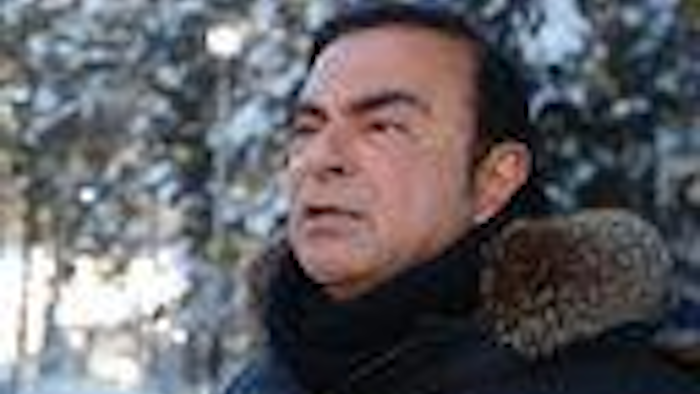 Facebook's chief operating officer Sheryl Sandberg says the world won't change for the good if only men continue to rule the roost.

Speaking at a panel on the first full day of deliberations at the World Economic Forum in Davos, Sandberg said the gender gap in business and government needs to be dealt with.

She says "men still run the world and I'm not sure it's going that well."

Sandberg, the only woman on a panel of six, also said Facebook will use its "Safety Check" more regularly in the future when necessary.

In an AP interview, Iran's foreign minister is decrying what he calls the United States' "addiction to coercion" with its new sanctions against Iran over ballistic missile tests.

Foreign Minister Mohammad Javad Zarif called the new US sanctions 'illegal' and justified Iran's program as self-defense. He spoke to The Associated Press ahead of an appearance at the World Economic Forum in Davos, where he was expected to take part in a debate focusing on the Islamic Republic.

The United States on Sunday imposed sanctions against 11 individuals and entities involved in Iran's ballistic missile program as a result of Tehran's firing of a medium-range ballistic missile. The new punishment came one day after the Obama administration lifted economic penalties against Iran over its nuclear program.

The president of Germany says that limiting the number of refugees entering Europe is necessary and "morally acceptable" if the continent is to continue to provide help to those in need.

While stressing the "humanitarian responsibility" of taking in victims of persecution, Joachim Gauck told a conference in Davos, Switzerland, that Germany and European countries must limit the numbers of people who want to come in to avoid being overwhelmed.

He cited the risk of some countries in the European Union wanting to re-establish borders within the 28-nation bloc, as security issues grow over the lack of checks. He said the EU's rules on freedom of movement throughout the bloc "can only be guaranteed if movement is controlled at the external borders."

The flow of millions of people, mainly from war-torn Syria, in recent months has put huge pressure on European countries to shut their borders and limit entries. The issue has become a hot topic and been used by populist politicians, some of whom favor closing national borders within the EU.

Gauck said that without limits on migration, the problem would grow and feed more populist movements, in turn creating even greater limits on Germany's ability to welcome those in need.

The head of the International Chamber of Commerce says China is the source of major worries for global business this year — but also on "everyone's investment list."

In an interview Wednesday with The Associated Press in Davos, Switzerland, John Danilovich said "China is weighing heavily on everyone's mind."

Yet despite its slowdown, he said China and the United States are the two countries that businesses in general are looking to for growth.

He said the year so far has already been "very disturbing and very unsettling" for business leaders gathered at the World Economic Forum.

The uncertainty is not just about shaky markets. Among challenges ahead, he said, are how companies can cope with the challenges of robotics and ever-expanding technology, and how to adapt business decisions to the lower carbon emissions promised in a global climate agreement reached by world governments last year.

The executive director of Oxfam International says ordinary people are losing faith in their political leaders and see them "as being in a cosy bed with business and cheating the ordinary person."

Increasingly, Winnie Byanyima says, average citizens are looking for solutions that are "outside the mainstream of politics." She spoke in the week that Oxfam published a report showing that just 62 people owned as much wealth as half of humanity, down from 80 in a similar report a year before.

In an interview with The Associated Press at the World Economic Forum in the Swiss ski resort of Davos, Byanyima said Oxfam will assess whether it will attend such events in the future, if nothing is done to combat the problems of inequality that Oxfam is fighting. Byanyima co-chaired last year's Davos gathering, and Oxfam is among several NGOs involved in forum activities.

The plunge in oil prices is a growing threat to the world's goal to reduce emissions through the increase in renewable energies.

The head of the International Energy Agency, which advises oil-importing countries, said Wednesday that the drop in costs for oil and gas threatens to reduce governments' incentives to improve energy efficiency — in their transportation networks, for example — as well as the installation of renewable energy plants.

Fatih Birol says that energy efficiency has been driven largely not so much by environmental concerns but an interest in saving money, which is disappearing as fossil fuels become cheaper.

World countries agreed in December to limit the rise in global temperatures, a move that will require a ramp-up in the amount of energy that comes from renewable energy.

Birol warned a panel of energy experts gathered in Davos: "For renewables, life will not be easy."