Oil accounts for a tiny fraction of electricity for the U.S. as a whole, but it powered more than 70 percent of Hawaii's electrical needs as of late 2013, according to the U.S. Energy Information Administration — and all of it had to cross an ocean to get there. 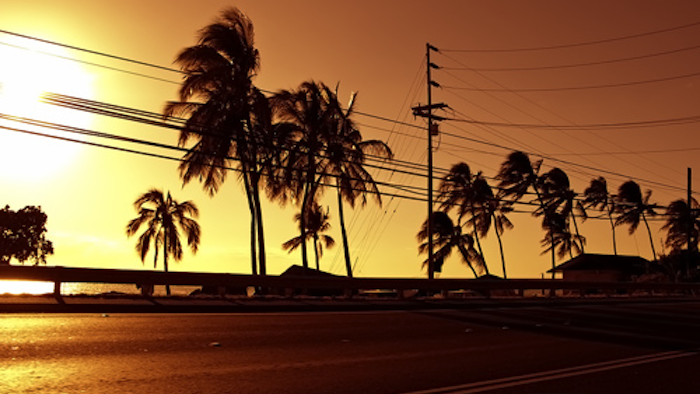 A series of changes at Hawaii's largest utility group aims to increase renewable energy production on the islands — and reduce the state's demand for imported petroleum.

Oil accounts for a tiny fraction of electricity for the U.S. as a whole, but it powered more than 70 percent of Hawaii's electrical needs as of late 2013, according to the U.S. Energy Information Administration — and all of it had to cross an ocean to get there.

And although crude oil prices have fallen considerably in the months since, imported oil led to energy prices in Hawaii that were the highest in the country and more than three times the U.S. average in late 2014.

More than six years ago, the financial pressure on Hawaiian utility rates led officials to partner with the U.S. Energy Department, with the goals of increasing renewable energy and creating a more efficient grid -- ultimately allowing the state to generate 70 percent of its electrical needs from clean energy sources by 2030.

Those efforts have reduced dependence on imported fossil fuels from a peak of 90 percent in 2008, as renewable energy tripled from 4 percent to 12 percent of the state's overall energy production between 2002 and 2013.

The prevalence of residential solar panels helped bolster that total. On the most populous island of Oahu, for example, 12 percent of customers had solar panels on rooftops as opposed to the 0.5 percent rate for the U.S. as a whole – despite a backlog of applications for new or expanded panels as Hawaiian Electric Industries Inc. attempted to reconcile applicants with its grid thresholds.

That, however, is set to change under an agreement last year between Hawaiian Electric and renewable energy groups, which would eliminate most of the backlog this spring and catch up entirely by the end of the year.

In addition, NextEra Energy Inc. announced the acquisition of Hawaiian Electric last month, putting the Florida-based utility -- one of the largest developers of renewable energy in the country -- in charge of 95 percent of Hawaiian ratepayers.